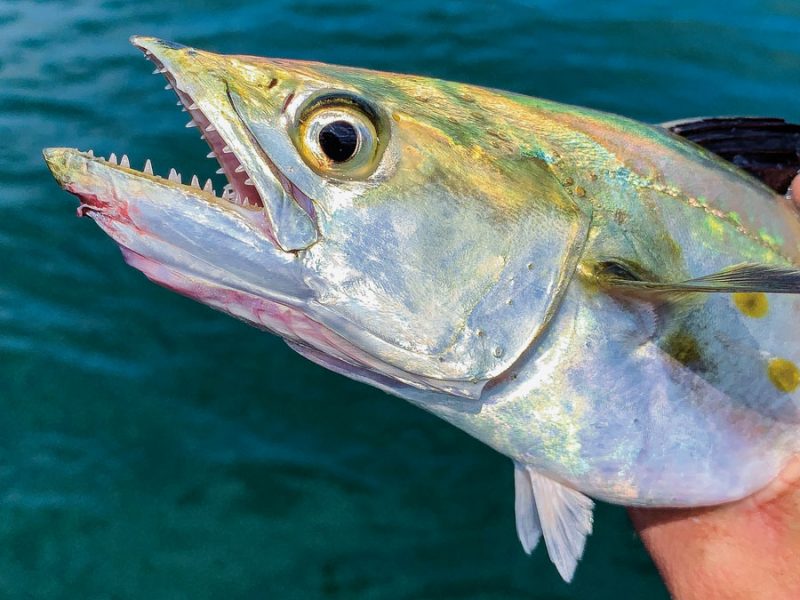 While the Northeast’s most heralded pelagic, the false albacore, arrives in September, recent seasons have provided earlier opportunities for anglers to target “hard tails.”

By June 2018, the ocean water of New Jersey was already unusually warm. The above-average water temperature held for most of the summer. By the middle of July, there were regular reports of Atlantic bonito and Spanish mackerel being caught from the surf. Anglers targeting these species were able to catch their fill of bonito through all of August, while the mackerel left at the beginning of the month. 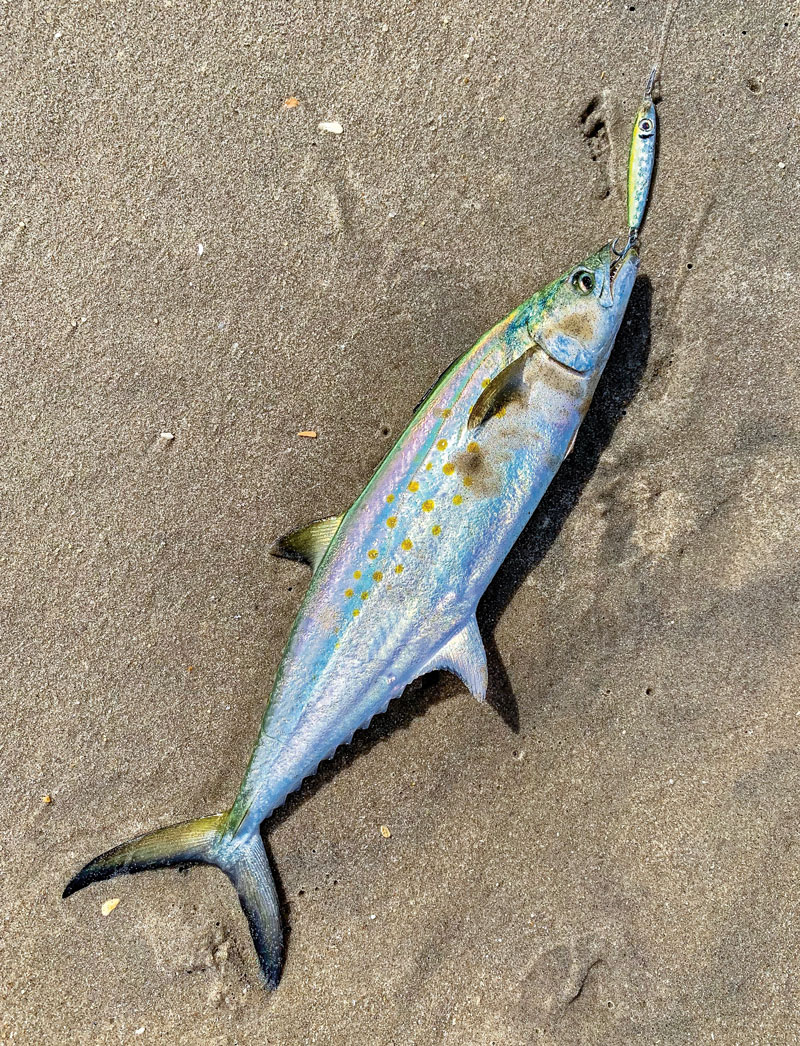 The first summer, my style of targeting bonito and Spanish mackerel was similar to my approach to false albacore. No matter where I fished—beach, jetty, or boat—my technique was casting far, allowing the lure to sink, and retrieving very quickly. This technique brought me my first of each species and then a handful more, so I just stuck with it for most of that summer and fall.

In July 2018, I blew through almost all my summer fishing budget on different weights and jig styles. Compact metal jigs that cast well produced the best results, and fast-sinking lures that stayed down through the retrieve got more bites. My ideal jig weight is 1 to 1.5 ounces with a small profile.

The mackerel stayed on the beach into September, when I caught some nice ones in the surf, both by jigging and with a quick retrieve.

During the summer of 2019, the techniques that had worked the year before—when there were relatively few mackerel around—didn’t seem to be working despite a greater abundance of fish. As the summer wore on, I came up with more effective approaches for these southern visitors.

While fishing, I quickly lost count of the number of fish I saw blasting out of the water. Despite the fish showing on the surface, I was not getting many bites with the cast-far, retrieve-fast technique. I thought back to the previous summer, when my friend Chris told me he had jigged a few mackerel from the bottom of the inlet, about 15 feet down. I started casting as far as I could up-current and letting my jig sink to the bottom. Since I didn’t want to fully bounce the bottom (such as when fluking), I hit the bottom and reeled up a crank or two. I did this just enough so that when I lowered the tip of my rod, I felt my jig hit the bottom. With the rod tip relatively high throughout the retrieve, I varied between single and double bounces about 1 to 3 feet off the bottom through an area. If nothing came back on the first drift, I repeated the same drift. After two unanswered drifts, I cast a bit closer, repeating the drift to cover a different section of water, continuing this process until I found the fish.

Throughout the summer, jigging 1- to 1.5-ounce metal jigs landed the overwhelming majority of my Spanish mackerel. Though this method was extremely effective, there were days when it didn’t work, even though the fish were all over the place.

Spin for the Win

On one outing, after a few hours of watching fish jump out of the water without so much as a single bite, in an act of pure desperation I tied on a 5/8-ounce freshwater inline spinner and began to cast. I could not throw the lure very far, but my setup was light enough to get the lure into range. Casting down-current, I let the light spinner sink as far as it could with the current ripping by. On the retrieve against the current, the lure kicked out a surprising amount of vibration. I did not retrieve fast at all because doing so would have been impossible with all the drag from the current. A few slow pulses on the super-slow retrieve were all I needed to get a bite. After hours of unanswered casts, this little white and silver inline spinner landed five nice-sized Spanish mackerel in 10 casts.

Near the end of the summer, when the fish were a bit more difficult to catch, a friend of mine clued me in on a method used down in Florida for targeting Spanish mackerel. Fishermen add casting bubbles (hollow, clear plastic spheres or cylinders that can be filled with water) to allow them to cast small lures a long way while still keeping them high in the water column on slower retrieves. Adding weight on the line means you can throw really small lures a long distance and work them in a slower manner.

Using an A-Just-A-Bubble and a Snapper Zapper fly made of Mylar flash, I caught fish when other methods would not work.

For casting to Spanish mackerel from beaches and jetties, my favorite setups were medium to medium-light rods from 7’ to 8’6” paired with matching spinning reels spooled with 10- to 15-pound-test braided line.

In general, I use the shorter rods when casting from the jetties, and the longer rods to help get more distance from the beach. The lighter braided line allows for longer casts and is plenty strong for both Spanish mackerel and smaller bonito, though I do sometimes bump up to 20-pound braided line for added abrasion resistance when fishing around rocks.

For a reel, I use the Penn Slammer 3, which I like for its retrieve ratio. Pulling in 40 inches per crank, this reel is perfect for fast retrieves or gaining line when a pelagic turns and swims right at me.

Spanish mackerel have keen eyesight, so a fluorocarbon leader is an essential part of the tackle. I use 3 to 4 feet of 15-pound test connected to the main line with a uni-to-uni knot. The long leader comes in handy when fishing around jetties.

While I released most of the Spanish mackerel I caught, a few that were mortally wounded by the hook came home to make a delicious dinner. Seasoning with salt and pepper, then pan-searing the fish in olive oil, lemon, and garlic produces a simple yet amazing dish.