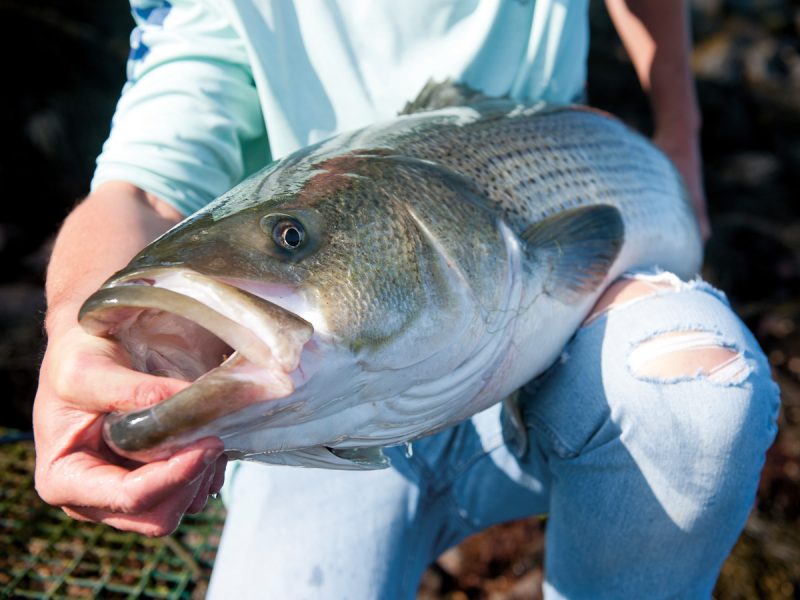 It took me a bit to realize where the sporadic black-brown stains in the water were coming from. I was standing on the bow of the Done Deal, Captain Bobby Rice’s 33-foot Invincible, rod in hand, waiting to come within casting range of the breaking striped bass.

The bass were breaking over a wide area, the size of a football field, but not in any concentrated groups. Still, just about anywhere you looked, you could see the white-water detonation left by a feeding bass. This was considerably different from that morning’s blitz, when the stripers packed tightly together as they swam just below the surface, mowing down clouds of larval sea herring.

As I wound up to cast, a bass broke just off the bow, sending a group of squid flying, and I immediately realized those stains were the ink released by the panicked cephalopods.

“Did you see that?” I shouted, but before I heard an answer, a striper engulfed my topwater plug.

Striped bass love squid—so much so that fishermen once referred to them as “squid hounds.” It’s long been one of my favorite nicknames for stripers, but until that morning off Cape Cod with Rice, I’d never actually seen stripers hounding squid.

Stripers dine on two different species of squid. The longfin squid moves inshore every year in varying numbers. Stripers encounter them from the east end of Long Island up to Maine. The shortfin squid is usually a pelagic species, but some years, shortfins move inshore in massive numbers, giving striped bass an all-they-can-eat calamari appetizer. By the end of May, it was apparent that 2018 was one of those years.

When stripers find squid in open water, the action takes place on the surface in spectacular fashion. To get a better view of the action, I climbed onto the Done Deal’s T-Top, where I watched small groups of squid jetting frantically under the surface while stripers chased them like hounds after a hare. To evade capture, the squid would take to the air and glide a few feet before touching back down. More often than not, by the time they landed, there were bass waiting for them. When a striper caught up to one of the squid, the strike was violent, like a submarine mine had gone off, sending a small geyser of white water up where the squid had been one second before.

In the 1940s and 1950s, fishermen had far fewer options when it came to striper plugs. When they needed a long-casting lure, they took one of the most popular plugs of the time, the Atom 40 metal-lip swimmer, and placed the rear hook on the line tie. Coming in tail-first, the lure looked like a squid, jetting across the surface to evade a pursuing striper. This modification was so effective that Bob Pond, creator of Atom lures, put it into production, calling it the Reverse Atom. This lure, though awkward looking, was a good representation of a squid with its transparent amber color. Though it’s no longer made, it occasionally appears at flea markets and garage sales, and would make a fine addition to a fishing plug collection and an even better addition to a surf bag stocked with squid-imitating lures.

Matching the color and action of a panicked squid is the most important part of getting bites in the middle of striper-squid savagery. We walked topwater plugs, like the Daddy Mac RD Bomb, through the fleeing squid and had hits nearly every cast.

Finding stripers blitzing squid in open water or in the surf is a dream-come-true scenario, and one that doesn’t play out very often. Most often, stripers slake their hunger at the shoals and rips where squid spawn.

During the strongest periods of the tide, stripers will chase squid through the face of standing waves in the rip line, creating exciting sight-casting opportunities. Topwater lures will catch in the rips, but soft-plastic stickbaits are tough to beat. Rigged weightless on wide-gap swimbait hooks or on light jigheads, the soft plastics dance and dart just below the surface as they sweep into the rip.

Stripers feast on squid just as greedily after dark, but the action takes place near the bottom, often within reach of surfcasters. With their gliding actions, darters and needlefish plugs make realistic representations of squid. Bucktail jigs, fitted with split-tail or hackle feather trailers, also swim like squid on straight, slow retrieves.

And though few fishermen do it these days, fishing the squid themselves is a productive way to catch stripers. Fresh, dead squid can be fished whole on a fish-finder rig in the surf while live squid can be live-lived with no added weight.

The squid-hounding stripers of spring provide some of the most exciting fishing of the season, so whenever you hit the water in May and June, be sure to have some imitation calamari with you.