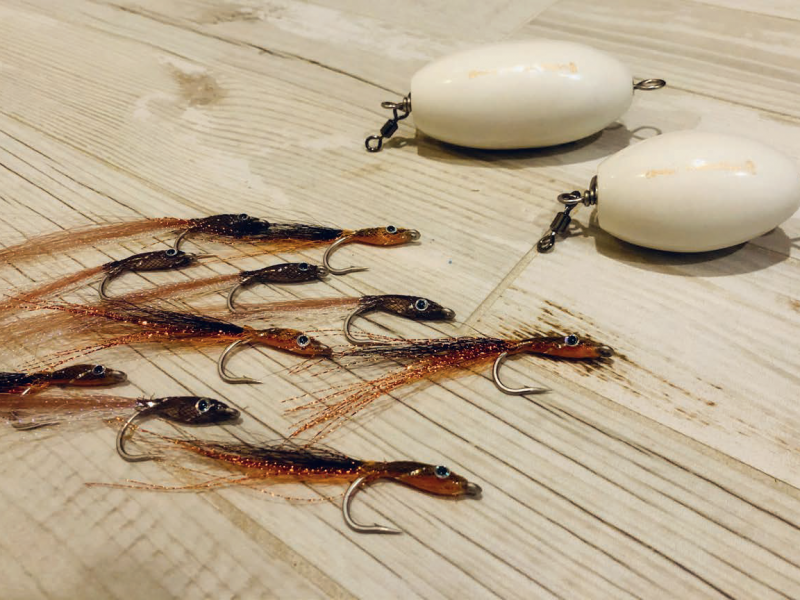 Over the past couple of years, I have been doing a lot of fishing with a rig called the float and fly. It’s nothing new. I remember reading about this rig in In Fishermen magazine in the late 1990s. It’s basically a small hair jig, the “fly” suspended below a bobber. It’s fished very slow, with long pauses, and it is downright deadly at getting largemouth, smallmouth, pickerel, and trout to bite in cold water. There’s also a saltwater variation of this that’s been around even longer and has been used to catch the season’s first schoolie stripers for decades: the casting egg and fly.

The casting egg is most popular around Rhode Island, especially the areas of South County known to harbor the first arriving stripers of the season. These bass, which usually arrive by the middle of April are on the small side, and are more likely to take small lures. Due to the still chilly water temperatures, they are also more likely to take slow-moving lures.

How to Rig a Casting Egg

The casting egg is shaped just like the breakfast staple, but it’s made of wood. Some of the homemade versions simply have screw-in eyes at the top and bottom, which are usually strong enough to handle the early-season stripers. Optimistic anglers—or those using the casting eggs again in the fall to deliver flies to false albacore—may opt for sturdier, through-wired models. The best eggs also have a small nail sticking out of the top third at an angle where the angler hooks their lure for the cast. This creates a more compact package, for longer casting. Once the egg splashes down, the jig falls off, and the fishing begins.

The egg adds enough weight for fishermen to cast small, ½-ounce bucktails or jigs a long distance on surf tackle. It also floats the jig above the bottom, allowing for slower, more deliberate presentations.

Cast out the rig and pop the egg across the surface a few feet before pausing and allowing the jig to settle for a bit. Sometimes longer pauses will be necessary for the bites, but unlike in freshwater, where some float-and-fly pauses are measured in minutes, 30 seconds is usually sufficient.

During the pause, the jig below the egg is by no means still. The wave action, wind, and current all give life to the lure, with subtle actions that fish of all species can’t seem to resist.

In addition to pairing it with small jigs, the casting egg also works to launch flies on spinning tackle to finicky fish eating small bait. In these presentations, the splashing of the egg, as the angler works the rig across the surface, also helps to attract attention to the fly. This works on albies, as well as stripers and blues.