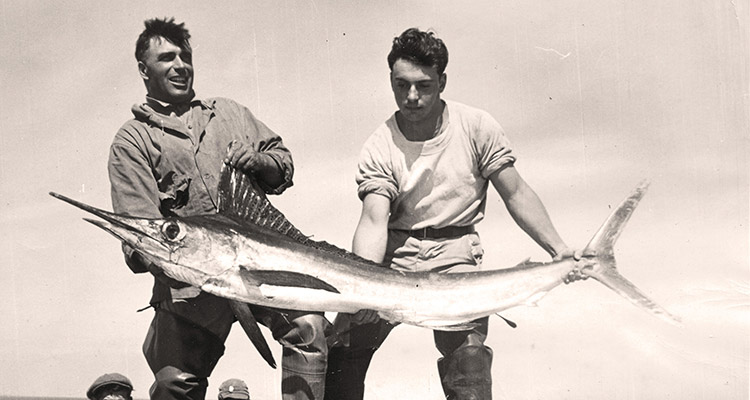 As a young boy on Cape Cod, I could often be found exploring nearby waters, searching for fish. Freshwater species were my primary targets, as saltwater required transportation to good fishing spots. The fish I caught, though exciting at the time, paled in comparison to the many photos of my father’s catches from years gone by. These were magical photos of monstrous fish from another time. I imagined the day I would have a boat of my own and could fill it to the gunnels with fish, just like in my dad’s photos.

My father was a commercial tuna fisherman in the 1940s and 50s, when the predominant way to catch tuna in New England waters was using weirs, or “fish traps.” Weir fishermen rely on nets and nature to make their catches. These weirs consist of long poles driven into the ocean floor, with nets strung from them. A long, straight line of poles and nets running in an offshore direction from shallower water toward deeper water would create a barrier, and at the deepest point of this barrier, there would be a heart-shaped chamber with a purse seine strung from it. The fish would swim along the coast until they were blocked by the trap. Their natural instinct to swim toward deeper water would bring them into the heart of the net. Once there, they would get disoriented and, unable to find an exit, be trapped until the fishermen returned to harvest them.

The Cape Cod Bay waters just off of Barnstable Harbor were a perfect spot for such a trap. The Goulart & Rupkus Fish Company worked weirs in this location from 1937 to 1964. My father, John Karras, worked for them in the late 1940’s. The photos he and his friend “Mickey” Goulart took show some amazing catches. They would sometimes catch 500 tuna in one day, from footballs to giants, with many other species mixed in.

The crew of Goulart & Rupkus Fish Company made just about everything needed for this fishery. They cut the trees, skinned the bark and tarred the poles and nets. They even built the boats they fished from. Their fish house was on Blish Point at the entrance to Barnstable’s inner harbor. It was there that thousands of tuna were cleaned and prepared for market. This was hard work, often done by family and friends. Bluefin tuna was not in the upper echelon of the seafood market as it is today. It sold for pennies a pound and was not as desirable as cod, bass or even mackerel. This was almost half a century before the U.S. began to ship bluefin to auctions in Japan. In fact, these men, many of them WWII veterans, could never have imagined the fruits of their labors ending up in Japan!

The news of a sailfish caught in the Cape Cod Canal in 2013, surprised many area fishermen. My dad, at age 85, was not one of them. “See, I told you billfish came through the Canal!” he gloated. He would often tell me of rare and exciting catches they would pull up in the nets, species you would not expect to find in the waters just outside Barnstable Harbor, including giant rays, sturgeon, huge goosefish and even marlin! I often look at his photo of Mike and Mickey Goulart posing with one of the three white marlin they caught in the fish weirs off Barnstable in 1949 and 1950. When I tell others about it, I can see the skepticism in their eyes. I can’t say I blame them. I would find it hard to believe, had I not grown up looking at the photos. The recent sailfish catch, some 63 years later, makes me wonder just how many billfish have come through the Canal in the past 100 years.