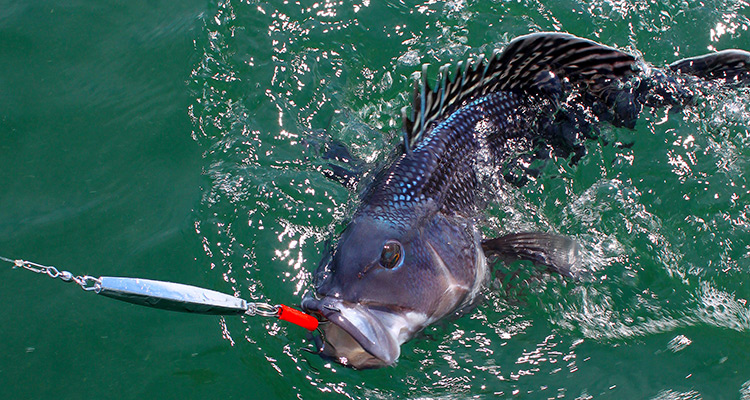 “Here we go!” Russ shouted over the classic rock satellite radio station playing Thin Lizzy at a louder-than-necessary volume. I looked up from the tip of my rod and followed his gaze to a spot a hundred yards off the port side of the Contender where a flock of hovering and diving seagulls had materialized in the middle of Vineyard Sound. Lines up, engine started, and we were headed toward the activity, trying to guess what was causing the small splashes on the surface. Too subtle to be bluefish…could it be small stripers? An early school of bonito?

Russ pulled back on the throttle, launched a cast with a Deadly Dick and we quickly had our answer in the form of a 3-pound black sea bass. Glancing at the helm’s Simrad display, I saw that we were over open, sandy bottom in 30 feet of water, well up current of the structure where we had been trying to bottom fish for sea bass just moments earlier. The screen was loaded with bait and fish. Instead of hanging on the deepwater wreck where we expected to find them, a school of sea bass was chasing small baitfish all the way to the water’s surface! Over the next hour, they popped up several more times, and eagerly hit anything we threw at them. It wasn’t an isolated event; over the next few weeks, other anglers had similar encounters with black sea bass behaving nothing like a “bottom fish.”

In the spring, they migrate north and inshore to southern New England, traveling into the relatively shallow waters of Vineyard and Nantucket sounds, Buzzards Bay and Block Island Sound by mid-May. May through June is spawning season, and it appears they are content to spend this time spawning and feeding with abandon in the 20- to 40-foot depths common throughout these waters. They certainly orient to structure in these (relative) shallows—many wrecks and reefs are well-known spring sea bass hotspots—but they can also be found on sandy shoals, along channel edges, and over areas of scattered hard bottom. It’s during this period that they become particularly aggressive and start acting less like bottom fish and more like sport fish.

I learned a lesson in the sporting quality of black sea bass on an early weekend in late June last season. Taking advantage of a calm morning, I launched my Hobie kayak in Buzzards Bay, planning to target a couple of rockpiles with bucktail jigs to catch a few eating-size sea bass. The action at the first spot was slow, with only some undersized sea bass and scup, so I decided to move toward the fleet of boats bottom fishing a popular ledge off Wings Neck. As I was pedaling along the edge of a channel, the fishfinder side of the split-screen on my portable Lowrance unit marked what looked like a pile of rocks rising 8 feet off the bottom in 30 feet of water. Thinking I had stumbled upon an unknown piece of structure, I doubled back over my GPS track. However, instead of finding an undiscovered shipwreck, I marked a clear ball of bait and fish. It turned out to be a big bunch of sea bass shadowing a school of sand eels. I switched to my schoolie-striper spinning rod, and every drop with a sand-eel-pattern Epoxy Jig was met with a quick strike. The sea bass ranged from 10-inchers to 2-pounders, and every one I brought to the surface was shadowed by three or four others. I stayed with the fish for an hour as they moved with the tide along the edge of the channel, keeping a couple and releasing a couple-dozen, enjoying the bend the bigger ones put in a medium-weight spinning rod.

How to Catch Black Sea Bass

While the old paradigm of bottom rigs and squid strips will always work on sea bass, the method has some drawbacks. First, thawing out a frozen block of squid and cutting it into strips makes a mess that most boaters would rather not deal with. More importantly, squid strips are likely to attract bites from nibbling bait-stealers like scup, tautog, sea robins and undersized sea bass that can tear the bait off your hook with one swing-and-a-miss. The more time you spend cutting squid and rebaiting your hook, the fewer chances you have to encounter a big lump-headed sea bass. Also, while bottom rigs and bank sinkers or 5-ounce bucktails might be necessary for tending bottom in deep water, you can lighten up when fishing in the relatively shallow spring sea bass habitat.

Lightening up your lures also means that you can put away the stout bottom-fishing rods and conventional reels and switch to your spinning gear. A 7-foot medium-weight rod capable of fishing 1- to 2-ounce bucktails and metal jigs will have enough strength to raise a big sea bass and you’ll actually be able to enjoy the drag-pulling, bulldogging fight of a 5-pounder.

You’ll have the best shot at connecting with a big sea bass if you increase your encounters—in other words, it’s a numbers game. The more sea bass you can hook, land, and release, the better your chances of eventually connecting with the big ones. This is why drifting is often preferred over anchoring; you have a better chance of swinging a lure past a big sea bass if you cover some ground, and a better chance of finding the fish when they aren’t stuck tight to a piece of bottom structure. Also, because you are fishing above the bottom instead of dragging a bottom rig, you can drift over rocky areas without constantly snagging up. Remember that the biggest sea bass feed aggressively in spring and will rise up in the water column to attack your lure.

Speaking of lures, there aren’t many that a sea bass won’t strike. A Spro Prime Bucktail jig with a soft-plastic or Berkley Gulp trailer is my first choice. To be specific, I like the 4-inch Gulp shrimp because it stays on the hook better than longer, thinner Gulp baits. Jigs like the Kastmaster XL, Game On EXO Jig, Crippled Herring, and Shimano Butterfly Jig in 4- to 5-inch sizes are effective as well when dropped to the bottom and then jigged back up through the first 10 feet of the water column.

It’s strange to think that their reputation as a good-eating bottom fish has limited the number of anglers who have enjoyed quality experiences tangling with black sea bass for fun. No matter how you catch them, they are still just as delicious, and if you break out of the “bottom fish” box and go after sea bass this spring with a lighter attitude, you’ll find that they are an aggressive, hard-fighting fish worthy of respect on the line, and not just on the plate.

This article was originally published online in May of 2016.