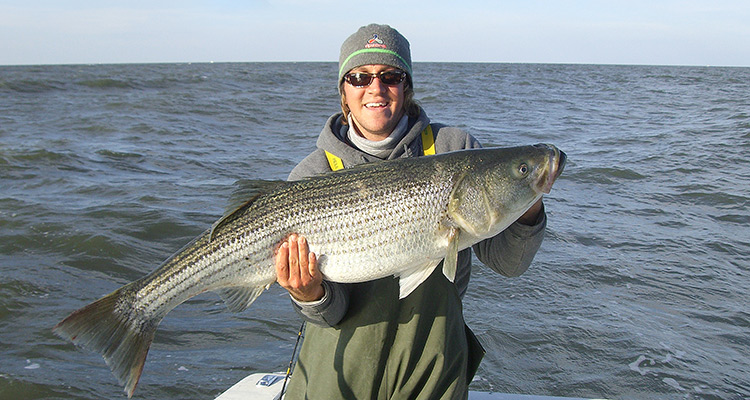 Pictured above: Chunking for Delaware Bay stripers gets started in October and lasts well into November.

I love the sound of my reel singing when I get hooked up to a big striped bass. It’s an exhilarating feeling, the feeling that I crave, and it is the reason I go fishing. In the fall, a big run of large striped bass comes through Delaware Bay. While the occasional big bass will be taken with bucktails or eels in the rips, by far, the most effective strategy for taking monster striped bass in the Delaware Bay is fishing with cut bunker, known as chunking.

Usually the fall striper run in Cape May starts in late October when water temperatures fall below 60 degrees and the bunker begin to show up. Stripers will continue to take chunks of bunker until early December. Once the water temperature drops below 52 degrees, the bunker start to disappear and so do the bigger bass.

There are a countless spots where anglers can chunk for stripers in the Delaware Bay. Any change in the bottom contour is a good place to look for stripers, but when chunking, this is not always imperative. In late October and early November, I focus on finding the schools of bunker. The easiest way to do this is by using your fish-finder. Look around the area you plan to fish for however long it takes to locate the bunker. Bunker move into the Delaware Bay in thick schools, so they will show up on your fish-finder as an elongated ball or a bunch of tightly grouped fish, depending on what kind of unit you have. I usually don’t have to stray too far from the New Jersey shoreline to find the schools of bunker in the fall.

Stripers are opportunistic feeders, and when bunker become scarce in late November, stripers will shift their diet to many different kinds of crustaceans, smaller fish, and mantis shrimp before they exit the Bay. Even though the bunker have left at this point, the stripers will continue to take cut bunker. When this happens, I focus my efforts on areas that hold this alternative forage, such as mud flats and reefs. These areas are mostly located in the center of the Delaware Bay and will require you to run a bit farther than earlier in the fall. I still look around for bait and marks on or near the bottom before setting the anchor. Late fall chunking often means weeding through dogfish and occasionally bluefish, but if you stick with it, you will get your stripers.

I recommend a medium-heavy rod and reel spooled with braided line to deal with the hard-running tides of the Delaware Bay, especially around the full and new moons. Trying to reel in a 30-plus-pound striper against a 2- to 3-knot current can be very difficult, so you will need a beefy setup during these times, especially when fishing in deeper water.

I favor inline trolling sinkers over traditional fish-finder rigs where the sinker slides freely up and down the main line. I use 2 to 3 feet of 40-pound-test fluorocarbon tied off to a 10/0 Gamakatsu J hook on one end and a barrel swivel on the other. The inline sinker helps keep the bait close to the bottom where the stripers are feeding when they are in the Delaware Bay. I use the lightest sinker that will keep the bait on the bottom. I change up weights throughout the tide, but diligence pays off. I have found that 2 to 6 ounces of lead is sufficient if you are using 50-pound-test braided line or less.

Many people use the fish-finder rig so they can ‘feed’ a striper on the bite before setting the hook. I found that I have a much better hookup ratio using the inline sinker and not feeding line to the fish. Instead, when you get the bite, be patient, and wait for the fish to take the rod tip down hard. When this happens, drive the hook home. If the striper bends the rod in half in the holder, still be sure to set the hook when you grab the rod. Do not allow any slack in the line during the hookup or the fight or else you will lose the fish. This tactic leaves out the common error of the angler feeding a fish for too long and allowing the bass to feel unnatural resistence and drop the bait. Stripers have pretty large mouths, and it is not difficult for them to suck down a large chunk of bunker quickly.

Everyone has a “special” way they like to cut up their bunker, and there really is no right or wrong way. What is important is that your bait doesn’t spin in the current, so be sure to cut your baits up and hook them in a way that keeps them from spinning. When fishing a head, I usually cut off one of the gill plates to allow more scent to be released. The best way to hook a head is through the back part, which, for lack of a better description, could be referred to as the bunker’s “neck” or “shoulders.” The hook will stay in place here, but it will pull free when you go to drive the hook home.

The two pieces of the bunker I like to use for big stripers are the head with about an inch of meat remaining on the back end, and a nice, meaty mid-section. All of my 40- to 50-plus-pound stripers have come on pieces such as these. I normally only get two baits per bunker, as I rarely use the part near the tail. I usually cut this part of the bunker up and throw it into the water to attract more fish.

The most important thing, and I cannot stress this enough, is having fresh bait. Your baits should be clear-eyed, firm and slimy. If they aren’t, you’re better off not going chunking because you are wasting your time. Yes, you can catch on a marginal bunker, but more often than not, you won’t. If you can’t get your hands on good quality baits, you are better off fishing the rips or trolling along the beachfront.

Work For Your Bites

Due to the fact that you are sitting at anchor when you are chunking for stripers, it is easy to get lazy and not change sinker weights throughout the tide, freshen up your baits, or keep an eye on your rods if you leave them in the rod holder. It is imperative to keep your hook baits fresh. I change them out every 15 to 20 minutes as they are usually washed out after this period of time. I take the used hook baits, cut them into smaller pieces and throw them back into the water. I toss pieces of cut bunker over the side when the tide is slack or moving at a slow to moderate pace. This definitely works as I have cleaned many stripers that had my chunks in their bellies. When chunking, I will go through 30 or more bunker in a tide.

I usually fish five to seven rods, depending on what the weather and tide will allow me to fish. Wind against tide conditions can make it difficult to fish more than four rods, and the tide changes can pose a similar difficulty. Be sure to fish slack tide just as hard as the running tide, as I have caught many of my biggest striped bass at this time. Most of my tournament-winning fish were taken at slack tide. When hooked up, I try to leave everything in the water that I possibly can. This leads to double-, triple-, and sometimes even quadruple-headers. There is nothing like having multiple hookups on cow striped bass! This is what chunking for striped bass in the Delaware Bay is all about.