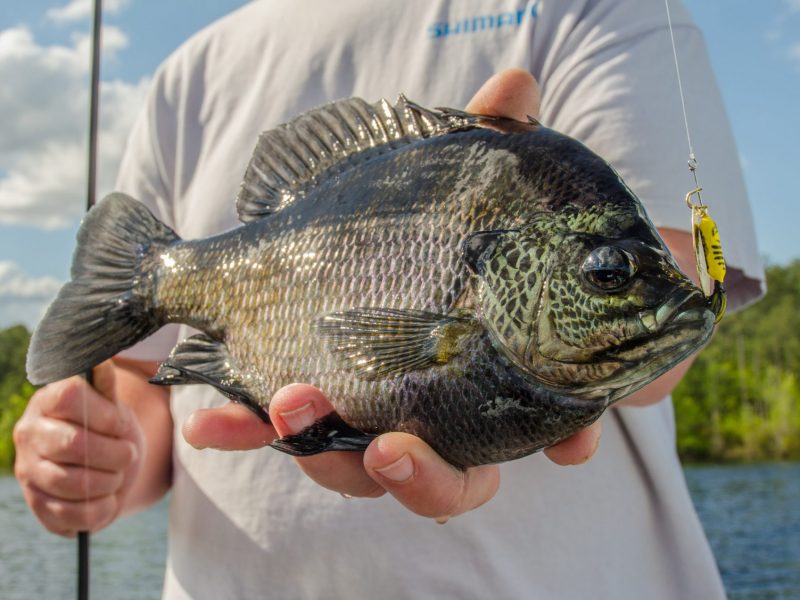 Of all the things I expected to see on the boat of B.A.S.S. Elite Series pro Keith Combs, a cup of nightcrawlers wasn’t one of them. Yet there it was, sticking out like a sore thumb among the professional-grade bass gear on his Ranger.

We were fishing Richmond Mill Lake, a private lake at the King Fisher Society, an outdoor retreat venue located two hours from Charlotte, North Carolina. Shimano had booked the week at King Fisher to showcase their new line of SLX DC reels in a target-rich environment.

The F1 largemouths have big bellies and small mouths. A blueish tint make them easy to distinguish from the native northern-strain largemouths also swimming in the lake.

By the time I reached the King Fisher Society, the bass pros and Shimano staff had been there for three days. They’d caught countless bass and found the addresses of some of the largest fish in the lake. Over dinner on my first night, there was casual talk about the hybrid bass and the tactics used to catch them, but the mood changed when one of the writers I’d arrived with pointed to a trio of fiberglass bluegills mounted to the wall and asked, “Has anybody caught one of them?”

Whatever image comes to mind when you hear the word “bluegill,” I doubt it matches what was hanging on that wall. These fish were the size of the dinner plates on the table. Two of them, the males, had Cro-Magnon brows, while the female was slightly more streamlined and colorful.

The owner of the King Fisher Society, Jim Morgan, told us that all of those fish weighed around three pounds, a size I’d never before associated with bluegills. They were, quite literally, a different breed of bluegill.

The bluegills that we catch in every pond, lake, and reservoir here in the Northeast is the northern bluegill. The prehistoric-looking panfish swimming in Richmond Mill are a sunfish subspecies known as the coppernose bluegill.

At the mention of bluegills, several of the fishermen began talking excitedly at once. While the largemouths had been willing players all week, bluegills were somewhat of a mystery. By the time I’d arrived, the bass pros had gone so far as to buy nightcrawlers to try and catch the giant ‘gills. Even those hadn’t worked.

It was the kind of attitude shift I’ve seen many times, when fishermen take a break from “serious” fishing just to just goof around. The gathering of professional anglers, tackle manufacturers, and writers planned their assault on Richmond Mill’s bluegills with the excitement of a pack of 10-year-olds plotting a water-balloon fight against their neighborhood rivals. Bluegills—northern, coppernose, or otherwise—are the official species of fishing for fun. Of course, all rod-and-reel fishing should always be fun, but fishermen in the “industry,” who constantly feel the pressure to win tournaments or “create content,” sometimes lose sight of that.

Coppernose bluegills are native to Florida and have a similar natural range to Florida-strain largemouth. They are popular among private pond managers because they grow quickly, and—unlike some other subspecies of bluegill—respond well to feeders, further increasing their growth rate. The name comes from the copper-colored band above the bluegill’s eyes. They have striking purple gillplates and much darker bodies than our northern-strain bluegills.

The following morning, I fished with Shimano Product Developer, Trey Epich, and Shimano Fishing Brand Specialist, Ethan Cox. While we had a fun morning catching bass to nearly 6 pounds, I saw Epich and Cox regularly eyeing the ultralight spinning rods stashed in the boat. With 90 minutes left until we had to return to the dock for lunch, we gave into temptation and grabbed them.

A favorite hypothetical statement among fishermen is: “If (insert fish species) grew to (insert outlandish size), I wouldn’t (A. fish for anything else, B. feel safe swimming).”

Bluegills are the most common fish we’d like to see grow larger. They are probably the scrappiest ounce-for-ounce fighter swimming in fresh water, and because small bluegills are easy to catch, we assume the hypothetical 10-pound bluegill would be easy to catch as well. After failing to hook a bluegill in almost hours of trying, I began to reconsider that.

The bluegill bites didn’t come easily. We cast around the cypress trees, near emerging weeds, even around the fish feeders. We caught plenty of F1 bass, but no bluegills. As lunch was being served, we made desperate last casts along the steep-sloping shoreline leading to the dock, and that’s where we found them. Epich, who’d landed the biggest bass of the morning, was more excited by the bluegill that attacked his Roostertail. Cox caught one next, and moments later, I hooked mine.

The fish fought much harder than the 1- to 3-pound bass that had been intercepting the small inline spinner all morning. It swam with surprising speed around the back of the boat, even taking line. I played it lightly on the ultralight gear, and after a surprisingly long up-and-down battle, I flipped a 1-pound bluegill into the boat. The fish had a protruding brow and a splash of copper-colored scales. I couldn’t fit my hand around it, so I had to cradle it in my palm to snap a quick picture with my phone.

For the afternoon fishing, I joined Bass Pro Keith Combs and Shimano’s John Mazurkiewicz. Keith was leaving that night for a tournament in Tennessee, and had yet to catch a Richmond Mill bluegill. The surest sign of his determination to hook a big coppernose was the cup of Canadian Crawlers on his console.

After the lunchtime revelation that the bluegills were holding along steep-sloping banks, the rush to the boats resembled the shotgun start of a tournament. Epich and Cox beelined for the same shoreline where we’d left them biting at lunchtime. Combs aimed his boat at the far side of the lake, where there was another steep-sloping shore.

As we approached the shoreline, Keith picked up the ultralight G. Loomis and Shimano combo and began flicking a 1/16-ounce Roostertail toward the bank. Once again, the F1 largemouths attacked the small spinner with gusto. I saw Keith’s rod load up again, but his body language was different. Instead of pushing the ultralight gear to its breaking point while attempting to land a largemouth, he played this fish more delicately.

It’s a little funny, watching a bass pro with more than $1,000,000 in career tournament winnings get so worked up over a sunfish. It was just as funny seeing Shimano’s Roy Leyva, who catches 30-plus-pound striped bass from shore, laugh hysterically while fighting a bluegill that would have barely been a meal for an average-size striped bass. To me, it was proof that a bluegill’s combative fighting style has the ability to bring the rolled-up-jean-wearing, cane-pole-touting fishing kid out of even the most serious angler.

When Combs got a palm under his bluegill and scooped it into the boat, he grinned from ear to ear. “This is my biggest ever,” he said, admiring the saucer-sized sunfish. After that, all three of us switched to small spinners, and we laughed like mad, catching bluegills between the bass and feeling like we were getting away with something. Keith topped his personal best bluegill two more times before we headed for the dock and he headed for Tennessee.

In the Northeast, 1-pound-plus bluegills are rare compared to the giant coppernose of Richmond Mill, but I believe catching sunnies of any size is good for the soul. So, dig some crawlers, grab some panfish flies, or tie on a small spinner and make time for bluegills before summer ends—your 10-year-old self will thank you.