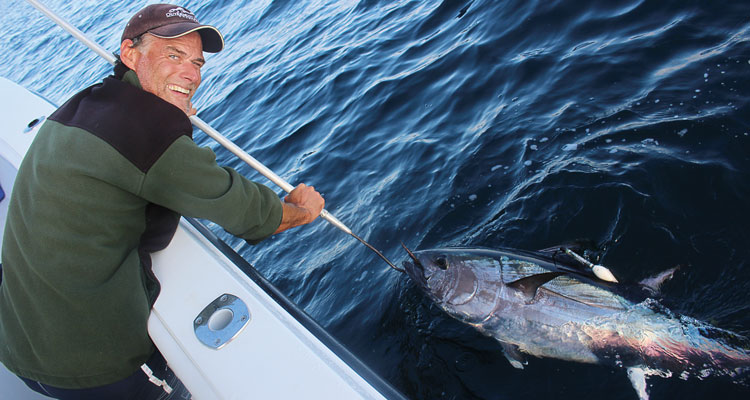 Pictured above: Capt. Josh Zacharias revives a large school-size bluefin prior to release during a memorable August day on which six tags were deployed.

Few saltwater anglers would dispute that tossing a plug or soft-plastic lure into a frothing school of feeding bluefin tuna, or coming tight to one while speed-jigging through the water column, represents one of fishing’s ultimate thrills. After a few pioneering anglers set out to subdue bluefin on spinning gear in the early 2000s, interest in the light-tackle “jigging and popping” fishery has continually grown, and several charter operators now specialize in guiding clients to a pulse-pounding, leg-shaking, involuntary-expletive-spewing encounter. Even among those who primarily target bluefin using more conventional means, arsenals of many anglers who set out offshore from New England to North Carolina frequently include at least a couple of spinning setups in case the opportunity to throw an offering into crashing fish presents itself.

And, it’s a good time to be a light-tackle angler—or any bluefin angler, for that matter. The most recent stock assessments conducted by the International Commission for the Conservation of Atlantic Tunas (ICCAT) suggest that neither the eastern nor western stock of bluefin is experiencing overfishing, and that both populations are rebuilding from their currently overfished states. If the trend continues, the opportunities for anglers to tangle with these incredible fish will continue to increase.

Dramatic improvements in the gear available to the jig-and-pop community have enabled anglers to land bluefin weighing more than 600 pounds on light gear, though the bread-and-butter quarry are fish that fall into the large school (47 to < 59 inches curved fork length [CFL]) and small medium (59 to < 73 inches CFL) size classes. Regulations in recent years have generally allowed anglers to keep one large school- or small medium-size fish per vessel per day, which means that when the bite is on, there can be high numbers of releases. In fact, data from the National Marine Fisheries Service’s Large Pelagics Survey indicate that in recent years, the number of fish released for these size classes has approached or even exceeded the number of fish harvested.

All these fish being let go begs the question: Do bluefin tuna survive after they’ve been caught and released by recreational anglers? Previous studies using pop-up satellite tags have shown high survivability for giant bluefin (weighing 250-1,000 pounds, 57 of 59 fish survived) caught by experienced anglers using 130-pound-class tackle fished out of rod holders with barbless circle hooks off Prince Edward Island, Canada. School-size fish (lengths of 27 to 47 inches CFL, 19 of 19 fish survived) were caught using 50- to 130-pound conventional stand-up gear while trolling off Massachusetts and New Jersey (Stokesbury et al. 2011, Marcek and Graves, 2014). However, post-release survival is known to vary with fish size and by gear type. Bluefin caught on spinning gear may experience greater physiological stress due to long fight times, and may experience physical injuries resulting from treble hooks commonly used on plugs. As a PhD student in the Fisheries Genetics and Pelagic Fishes Program at the Virginia Institute of Marine Science (VIMS), I sought to investigate the post-release survival of light-tackle-caught large school- and small medium-size bluefin, as well as to identify best practices that could maximize the survivability of released fish.

Following the Bite—Day and Night

In many ways, tuna research is similar to tuna fishing: little sleep, less-than-ideal dietary habits, and dropping everything at a moment’s notice (and often driving through the night) to get offshore when the getting is good. My own field work, which involved deploying satellite tags on bluefin tuna off Massachusetts and North Carolina’s Outer Banks, relied heavily on the generosity of charter captains and their clients to allow me on board to tag any fish they released (typically after the one permitted fish per day had already been harvested). I’m especially indebted to Massachusetts Captains Dom Petrarca (Coastal Charters Sportfishing) and Bobby Rice (Reel Deal Fishing Charters), and to North Carolina Captains Ned Ashby (Sea Breeze) and Dan Rooks (Tuna Duck) and their clients for regularly letting me hitch a ride to the grounds, though a large number of captains and anglers contributed to the effort. Tagging—again, like tuna fishing itself—was streaky: We would go several days without hooking a fish, then deploy multiple tags in a single outing. As they say, “You don’t know if you don’t go.”

Any fish caught using light-tackle methods that was to be released was implanted with a pop-up satellite archival tag programmed to record daily summary light level and water temperature data for a month before popping off the fish, floating to the surface, and transmitting the data via satellite; I could then retrieve it online to infer whether the fish survived. We deployed tags in three general areas: East of Oregon Inlet, North Carolina; off outer Cape Cod; and south of Martha’s Vineyard. We caught fish using a variety of light-tackle offerings, including stickbaits with treble hooks, single-hooked soft plastics, and vertical jigs rigged with assist hooks. Fight times were recorded for each fish, as were the hooking location and fish condition (bleeding, color, activity, etc.). Fish handling and release methods were left to the discretion of the charter crew and anglers. Handling approaches including lip-gaffing (either leaving the fish in the water or bringing it onboard) or holding the fish under the gill plate and sliding it onto the gunwale; some captains elected to revive fish boatside for a minute or two, while others simply dropped them overboard. We tracked all of these factors to determine if any of them significantly impacted survival.

What did we find?

After nearly two years, thousands of miles on the road, and hundreds of phone calls, texts, and Facebook messages with charter captains and clients, a total of 22 satellite tags were deployed on jig-and-pop-caught bluefin tuna ranging from 45 to 79 inches CFL (average of 59 inches CFL), with fight times ranging from 4 minutes to a marathon 78 minutes on a particularly demonic 76-inch fish caught off the Outer Banks (the average fight time was 21 minutes). A total of 14 of these tags successfully popped off fish and transmitted data, while one tag that did not report was recovered by a beachcomber in North Carolina, bringing our total sample size to 15 fish. (Check out the map to see the short-term straight-line movements of fish tagged off Massachusetts.) The relatively low reporting rate, while not ideal, was not completely unexpected given that this study represented the initial beta-testing of a new type of satellite tag whose relatively low cost ($900 each, compared to $3,000-$4,000 each for other commercially available tags) may enable future larger-scale studies on bluefin tuna and other species. The reporting tags remained attached to fish anywhere from 8 days (early shedding) to 97 days (failed programmed pop-off).

By examining the temperature and light data transmitted by the tags, we inferred that 14 of the 15 fish survived following release. We were able to tell, for example, from broad daily temperature ranges, that fish were moving up and down in the water column, and were not resting, dead, on the bottom.

One fish—a 46-incher (CFL) tagged south of Martha’s Vineyard—was less fortunate. Based on the light and temperature data transmitted by the tag, we were able to infer that it was eaten, most likely by a mako shark, 18 days after it was released. However, the fact that it did not die until nearly three weeks after being caught raises an interesting question: Did this fish’s demise have anything to do with getting caught and released, or was it simply an “unlucky” fish that was in the wrong place at the wrong time? It’s hard to say for certain whether it was affected by having been caught—was it less able to evade capture due to the stress from several weeks before? However, given findings from previous studies that most observed angling-induced mortalities tend to occur in the first day or two after release, for the purposes of this study this fish was considered a survivor, bringing the final tally to 15 survivors, or 100% post-release survival for fish whose tags reported.

What do results tell us?

While the sample size is small (only 15 fish, caught by a handful of anglers and captains), the results appear to indicate that catch-and-release fishing for bluefin tuna using light tackle is a viable conservation method. The finding corroborates previous research showing, in short, that bluefin tuna are tough creatures, and is certainly encouraging news for both anglers and fishery managers. Interestingly, we found in this study that fight times with light tackle were generally no different than fight times with heavier conventional gear, likely reflecting the fact that while braid may be more commonly employed by jig-and-pop anglers, the breaking strengths of the line used—typically 80 or 100 pounds—are generally not different between the two fisheries. In fact, in both cases, it’s often likely that the strength and skill of the angler—not the breaking strength of the tackle—was the ultimate determinant of fight time. After all, how long can you tug on a bluefin with 30-plus pounds of drag?!

Though we didn’t observe any post-release mortalities in this project, there are a couple of best practices we recommend anglers employ to maximize the survivability of bluefin—caught while jig-and-pop fishing or otherwise—following release.

• Keep the fish in the water during the unhooking and release process.
It’s actually against the law to remove a highly migratory species (tuna, shark, billfish, and swordfish) from the water if you intend to release it, so play by the rules! Moreover, taking bluefin tuna out of the water not only prevents them from being able to respire, but can also lead to physical damage (removal of slime coat, lacerations, etc.).

• Use a lip gaff to control the fish while boatside. Unlike billfish, a tuna doesn’t have a convenient “handle” to facilitate unhooking and release. However, a small lip gaff placed in the lower jaw of a bluefin can help keep the fish under control as you remove the hook.

• Use single hooks instead of treble hooks on artificial lures.
While no mortalities were detected for fish caught with treble hooks in the present study, treble hooks generally lead to higher levels of physical damage, which in some cases could jeopardize survival. Moreover, treble hooks can be difficult to remove from fish you intend to release, which can lead to longer handling times/air exposure and potential harm to the fish, but also is a lot more dangerous for the angler trying to remove the hooks from an ill-tempered bluefin!

Willy Goldsmith is a PhD Candidate at the Virginia Institute of Marine Science, College of William & Mary. If you would like to learn more about research on Atlantic bluefin tuna or other gamefish species occurring at VIMS, feel free to email Willy at: wmgoldsmith@vims.edu.