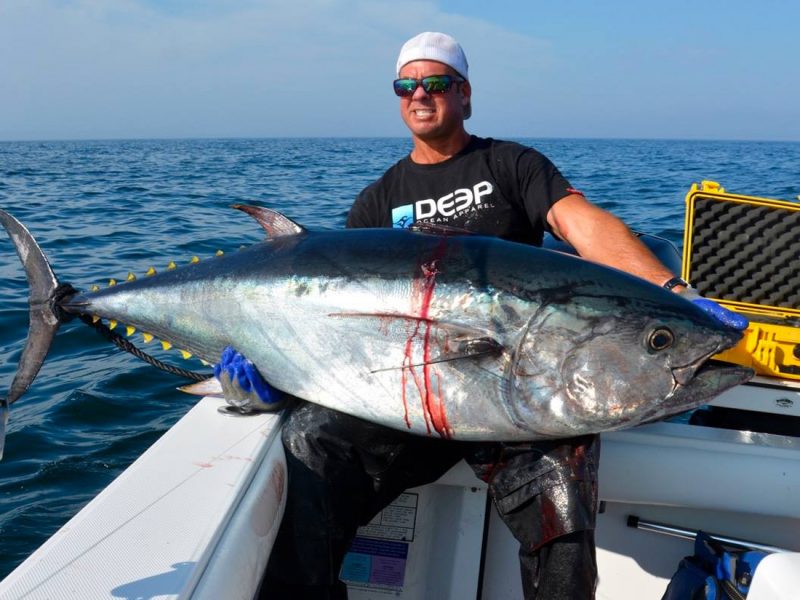 Fall presents a wonderful opportunity to head offshore in pursuit of hungry bluefin tuna. These fish are bulking up for a long run south, and in many years this is the most productive season to target them in the Gulf of Maine. It is common to see bluefin tuna of all sizes pushing bait aggressively at the surface in the same manner as bluefish, creating a display of topwater pandemonium.

While trolling tends to be the most common means of targeting bluefin tuna in the Gulf, chunking can be equally effective and considerably more exhilarating. With the vessel at anchor and the rod in your hands attached to a gimbal belt and harness, get ready for a one-on-one battle with one of nature’s most powerful marine predators.

Bluefin tuna chunking is not an activity for those who enjoy hitting the snooze button a few times. Prime tuna bites often take place at dawn, so the best time to be fully set up with a good slick running astern is before the sun peeks over the horizon. You will be running offshore in the dark, so a good radar unit is essential.

Since bleary-eyed anglers often like to relax and catch a little shut-eye before the day’s work begins, it is well advised to be fully prepared and organized the day before heading out. This means cutting three to four flats of herring, mackerel or butterfish into chunks and storing them in 5-gallon buckets. Place the buckets in a large cooler and pour plenty of ice on top of the chunks and in the cooler. Even if it’s cold outside and you are sleeping on the boat, never leave the buckets outside as gulls and terns may make off with their contents as late-night snacks.

The size reels you will need hinges on the size of the bluefin you plan to catch so make sure to find out whether the fishing has been dominated by schoolies, mediums or giants. At times, different locations within striking range can hold completely different-sized fish. That, of course, is a luxurious dilemma to have and one of calculated risk. School bluefin tuna in the 20- to 50-pound class can stack up on a ridge like bluefish and can sometimes be caught in impressive numbers. Mediums and giants are less common in great numbers but present the opportunity of a far more prized catch. Occasionally, school tuna will be found side-by-side with their elders. In this scenario, I would advise erring toward tackle more appropriate for the bigger fish because losing a sizable bluefin for no reason other than being underpowered could make for a long winter.

Unless I am exclusively targeting school-sized fish, I will rig up with 600 to 800 yards of 65-pound-test Izorline, which allows reasonable flex should a big tuna engage in a significant run. While some tuna anglers are still advocates of mono (due to the stretch factor), I prefer the extreme strength of braid and the fact that it allows me to use a smaller reel. Most of my big-game outfits are equipped with Penn reels, and my weapon of choice is the International 30VISW. Those who are pure giant hunters tend to go bigger, but even a giant can be subdued on a stand-up reel nowadays, thanks largely to braided line.

On the business end, I use a 50-pound top-shot leader connected to the braid with a Bimini Twist, double uni or Albright knot. While this connection will be your weakest link, these knots are extremely strong and can withstand enormous amounts of pressure. In a top-shot setup, the leader is considerably longer than a traditional length, giving me the advantage of the mono’s stretch and diminished visibility. I typically use 75 to 100 yards of monofilament on top of the braid. Tuna have exceptional vision and tend to pick up braid faster than mono so use a clear, pink or silver mono and take your time with the connection. Tie the knots at the dock or in your basement—not while heading offshore or, worse, once the action has begun.

When small bluefin tuna under 50 pounds or so are the target and there is little or no chance of hooking something bigger, I will scale down the tackle significantly and either use a 3/0-size conventional or a Penn 750SSm spinning reel. For pure sporting purposes, there is nothing better than hooking a school tuna on spinning gear and hearing the drag scream as the fish dives straight down.

Once you arrive at the targeted location, often somewhere within Jeffreys Ledge, spend a few minutes to “read” the area. What do you see showing up on the recorder? What’s the wind direction? How is the tide running? If other vessels are present, what’s the VHF chatter? Synthesize and observe as much as possible to optimize your chances. When fishing in a fleet, my ideal position would be along the edge of the crowd over a drop-off. Under most circumstances, you will be chunking at anchor so select your position carefully (and ensure you have plenty of anchor line for the depth). The idea is to get a nice slick going with the current, drifting bow to stern. I can’t emphasize enough how important it is to start the slick in the dark. You have to figure 30 to 45 minutes to establish a nice flow in your slick.

Once the slick has been established, start drifting bait, which should be a whole version of the chunks you are using. Herring is usually my bait of choice in the Gulf of Maine because this is what the tuna principally feed on, though butterfish is a good second choice. While this species tends to be more common in the offshore canyons south of the Montauk, New York, even Prince Edward Island giants have been taken on them; it’s a tried and true bluefin favorite. Mackerel is a great bluefin bait, but be careful with it early in the season. Mackerel is very oily and is a favorite of blue sharks. When these sharks get in your slick, there is usually nothing you can do but pick up and move somewhere else. They are aggressive—they will slice through your leaders and even go after hooked tuna. Squid is another option, but only as a hooked bait—not a chunk (they don’t have the pungent smell of the others and are too expensive to use as chum). Either way, I always head out with at least two types of bait to give myself an alternative should the tuna be finicky.

When there’s a decent amount of current and wind, and the tuna are situated in the upper 100 feet or so of water, try drifting baits without a sinker. This natural-looking presentation allows the hooked bait to slowly flow down at the same speed that the chunks are falling. On still, calm days (the worst conditions for tuna fishing) or when the tuna are holding deeper, a small sinker will be necessary. Start with a 3/8- or ½-ounce split shot (or rubber core) sinker and adjust accordingly. Regardless of the conditions and strike zone depth, the less added weight, the more natural the presentation will appear.

Conditions play a big role in tuna fishing as they do in so many varieties of angling. When it’s glassy calm and sunny, it is generally difficult to provoke strikes. Choppy seas, overcast conditions and a bit of wind help in moving the baits and shielding the line.

Also of importance is how you hook the bait. Both herring and mackerel are slim, elongated fish that are best hooked behind the dorsal fins. Insert the hook deep into the body cavity and expose the point and barb on the opposite side. Squid should be hooked in a similar fashion on the opposite side of the tentacles. Butterfish are more circular and flat, and are bit trickier to hook properly. Insert the hook into the mouth of the butterfish and run it out the gill slit on one side. Then, take the point of the hook and gently insert it back into the flesh—just enough so the hook is not flopping about. The barb should be exposed out the gills but the point should be inserted gently in the flesh. If you haven’t used butterfish as bait before, practice the technique at the dock first. You don’t want to be fumbling over hooking baits amid a torrid bluefin bite.

In my view, chunking is the most exhilarating method of catching tuna. There are few angling experiences that bring on as much adrenaline as having a bluefin slam your rig while you’re slowly peeling line out. Getting to this point, though, requires a significant amount of preparation, organization and work. Take the time to get organized and have everything perfectly prepared, which will put you an optimal position to come home with a tuna in the cooler.

For more on bluefin tuna information, check out these On The Water articles:
Jigging for Bluefin Tuna
Big Bluefin Behavior