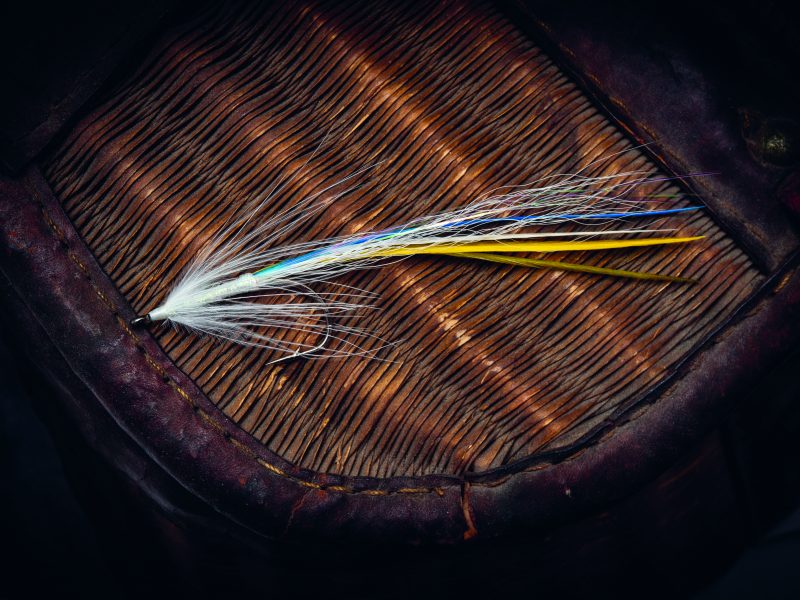 Mid-June through summer is a great time to fish the Big Eelie fly pattern.

Steve Culton, from Connecticut, is a guide, outdoor writer, speaker, and fly tyer. The Big Eelie, one of Steve’s favorite patterns, was developed by Ken Abrames. Steve caught more striped bass over 10 pounds on this fly than on any other pattern.

The Big Eelie is Steve’s favorite sand eel fly, especially for the beaches and flats of Block Island and Cape Cod. Water that’s 1 to 8 feet deep over a sandy bottom, or any location that sand eels frequent, is a good place for the Big Eelie, especially on a moving tide over a flat or on a shallow beachfront.

The first sand eels to show up inshore are usually matchstick-sized, but they quickly grow to 3 inches and longer. That means mid-June through summer is a great time to fish the Big Eelie, especially from dusk to dawn. You can tie it any length but Steve likes it best at 4½ inches.

According to Ken Abrames, “I like to look at baitfish differently than most people. For sand eels, I looked at their transparency, their translucency, and the colors formed by their scales. Their scales are really prisms and transform as different kinds of light hits them. The colors of the saddles form many different kinds of colors, especially greens, which is exactly what the scales on a sand eel do. The marabou adds vibrancy and movement, even though you can still see through it. So, the fly looks alive even when it is sitting still.”

Steve has adopted Ken’s concept that what you leave out of a fly is as important as what you put in. The guiding principle behind the Big Eelie is thinness. According to Ken, “The secret to tying effective sand eel flies is how thin you make them.” He says that sometimes 1/8 of an inch wide is too much.

Sand eels burrow into sandy bottoms as darkness falls and re-emerge as daylight arrives. But not all of them make it because bass pick stragglers off and root around to expose others. So, any time between dusk and dawn is prime time for fishing the Big Eelie.

Steve explained, “I love to fish the fly on a sweeping current over a flat or sandbar and also dead-drift and present it on a mended swing. If there are actively feeding stripers keyed on sand eels, sometimes all I have to do is pick out a rise ring, then make an accurate cast. The strike often comes immediately.

“The Big Eelie is also a terrific searching pattern. Off a jetty or on a flat, beachfront, or sandbar, I fan[1]cast to cover water and animate the fly with very, very short, 1- to 2-inch pulsing strips. I call these micro-strips. Sometimes I’ll make a few strips, then pause (sand eels often move frantically and erratically). I almost always use a floating line for this fly.” For the record, I used micro-strips once when my ear got caught between the tow bar and boat trailer. But, I digress again.

Steve said, “One night on Block Island, I was fishing a beach on an outgoing tide. A school of ten- to fifteen-pound striped bass was holding on the edge of a sandbar, crashing sand eels on the surface. I had the beach all to myself, save for one other fly angler to my right. We were both catching, but I was catching substantially more, and bigger stripers. This went on for several hours, and I finally had it at 1:30 am. As I turned to walk down the beach, the other angler reeled up and chased after me. “Hey!”, he said, “I gotta know what fly you’re using.” I showed him, and gave him a couple. This scenario plays out every year, and I always make sure I have plenty of Big Eelies to hand out.”