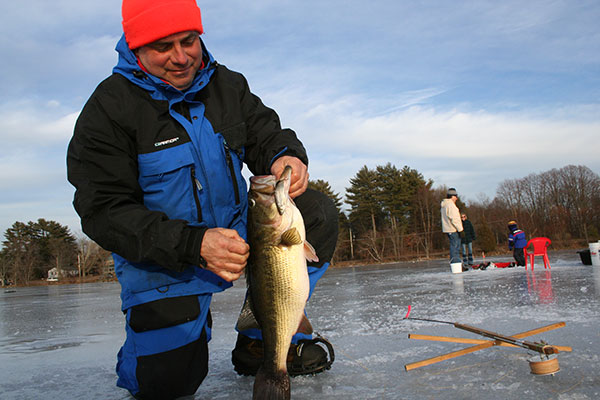 Set your traps on a trout pond and set your sights on oversized bass!

As I eyeballed the sloshing bucket filled with oversized shiners, I could only hope that a few hawg largemouth bass would find them as appealing as I did. But plans were about to take a 180 degree turn; no sooner did I pay up when the bait shop owner dropped a bombshell on me. “Did you hear, they just stocked White Pond with trout?” Suddenly my bass bait did not seem nearly so attractive.

As I exited the shop, I faced a conundrum. My quest was for black bass, but fantasies of lights-out catching of uneducated stocked trout sure seemed alluring, especially after a few recent outings that were light on catching and heavy on shivering. But I had bait big enough to scare most stocked trout; I was beginning to get a brain cramp and it had nothing to do with the frigid weather.

The decision I arrived at was that I would indulge in both because fortunately, nestled in my pack basket among my Indian Hill and Jacktrap tilts, was a sweet Jason Mitchell panfish jigging stick Santa had recently given me. And tucked away among my assortment of crappie and bluegill glow jigs was a few 1/12-ounce Kastmasters; as luck would have it, I had with me all the tools needed to tempt a trout.

As for those Lake Okeechobee-sized shiners, I figured that I’d do a double header, first hitting White’s Pond to bang a few ‘bows, then speeding off toward my other destination to focus on bass. But to be honest, combo trips, especially those that involve trudging through snow and making Swiss cheese out of 12 inches of ice, seldom follow plan. Usually, equal parts exhaustion and a winter-shortened window win out over enthusiasm.

So I decided to wing it at White Pond and set up my traps, dropping a few of those mega-shiners close to the bottom while I jigged up trout. I wasn’t two traps into my plan when the first flag went off. Wind flag, I figured. But on this day there was not a whisper of a breeze. Perhaps the bait triggered the trap, I surmised. But the chosen trap was a Jacktrap East Grander, which are outfitted with a bait clip and when adjusted properly will not let baitfish spring a false flag. Option C was that I had a real, honest-to-goodness hawg bass that inhaled that 5-inch shiner; the promise of which caused me to pick up my pace considerably.

One of the ancillary thrills that keep ice fishermen coming back for more despite the challenging conditions is the chatter of a rapidly unraveling spool—and the arbor on this trap was chattering like a kingfisher. It took but a few seconds to close ranks on the trap, and even though my instincts told me to wait a bit on the hookset, anticipation got the better of me as I plucked out the trap, grasped the line and set the hook on a real dandy. After a short give and take, I lipped a 6-pound largemouth bass that was perfectly proportioned, bore no battle scars and was decidedly more colorful then the bass I was accustomed to pulling out of more typical bass water.

My jigging stick would get little use that day and any notions of trout were quashed after landing that nice bass. From that day forward, I would never view trout ponds and lakes the same. Now I spend a good deal of my winter time “discovering” underutilized ponds and lakes that are noted more for salmonoids than largemouth or smallmouth bass. Far from being far-off destinations, many of these gems are within the shadows of densely populated areas.

Unique conditions conspire to make trout water potentially hot hardwater havens for big black bass. Principally, it is the relative lack of fishing pressure. Even trout ponds that are fished for bass during open-water season see scant hardwater attention for smallies and largemouth bass, as most folks putting forth the effort are there for the trout. Secondly, top notch trout water often has calorie-rich forage, such as landlocked alewives or smelt, which are the impetus to improved growth rates for bass. Biologists are fully aware of the potential for superior growth and holdover probability that water bodies with a lot of forage provide and will skew stockings toward them. A good starting point for bass-rich trout water is to find one that is stocked often and is renowned for holdover trout. Chances are that the same prey sources that allow the trout to grow big also benefit the resident bass.

And finally, the trout themselves aid in the growth of black bass. Anyone who has paid attention to black bass trends is well aware of the swimbait phenomenon, in which anglers wield saltwater-sized baits and catch almost-impossibly large freshwater bass. One of the more common varieties of these swimbaits is a knock-off of a rainbow trout similar in size to a stockie. It seems as if big black bass relish regular visits of the hatchery trucks almost as much as fishermen do.

I also have a hunch that a pond that is regularly stocked with brown trout will grow bigger bass then one that receives just rainbows. One reason may be because the highly piscivorous brownies will be more likely than their rainbow cousins to feed on juvenile bass. This could be a case where predation on the targeted gamefish is actually a good thing, as the smaller bass will be culled out resulting in fewer fish but larger ones. The point here is not to celebrate numbers but rather size. You can identify which ponds receive brown trout in addition to brookies and rainbows by networking with local bait shops, keeping watch of the On The Water online Fishing Forecast, where we dole out the specifics on what species are stocked and where.

Now that you’re brimming with hope of hanging your personal best black bass and have a few “experimental” ponds in mind, how do you tackle that trout water? Bass feed aggressively at first ice, so as soon as it is safe, get out there. Owing to their reduced metabolism, after a few days of good fishing you may see a dip in the action since the bass might not feel the need to feed for a week. Later in the season at the tail end of the winter, feeding rates will improve once again as fish become more active in preparation for the spawn.

You can shorten your search for fish on a prospective pond or lake by studying pond and lake topography charts. For Massachusetts water bodies, you can find these maps on the Masswildlife website. Look at the contour lines for bends and points, and in the later part of the season, look for bass to gather in deep water at the entrance to a potential spawning bay. In addition to depth edges, bass are fond of weedlines, timber and blowdowns. Expect largemouth bass to be congregating at depths of 15 to 25 feet, while smallies are content to hunker down as deeply as 35 feet or more.

Once you’re on the ice, a portable sonar system can pay off handsomely. You don’t have to buy a pricey, complex unit. Portable, affordable devices such as the Marcum Ice Troller will help you elminate unproductive water quickly. These gizmos allow you to separate dead zones from interesting water, where depth changes, bars, humps, structure, bait and bass are obvious.

What will distinguish you from your fellow ice-creepers on trout water is your choice of bait. Opt for big baitfish, maybe even pike shiners, which will stick out from the pinheads, small shiners and mealworms strung from the surface by those anglers aspiring for trout. A big bass will not waste the energy to chase around small prey, but dangle an extra-large shiner in front of its maw and chances are it will be fish-on!

Since members of the Esox clan are often in limited supply in sparsely weeded trout water, you should consider downsizing your leaders since you won’t need the extra insurance for toothies. In fact, part of the allure of this environment is the relative emancipation from that most dreaded member of the pike clan, the “slime dart” or chain pickerel. While bass typically are not considered line shy, in the gin-clear wintertime water of a trout pond, they can be fussy. I choose 4 to 6 feet of 8-pound-test fluorocarbon leaders and find it makes a big difference over heavier monofilament. Another trick that I have found matters is to lop off the dorsal fin and one of the pectoral fins of the shiner. Not only will this modification make for a more alluring wiggle, but the shiner will be less apt to swim to the surface or tangle in weeds.

A terrific tweak that has made my baits all the more alluring is the addition of scent attractant. The activity level of a cold-blooded critter such as a bass will be at a nadir during the winter months, and sometimes it takes a little added stimulation to get them hungry. I’ve been using scent wands marketed by BioEdge and found that the added scent often flips the switch. As testimony of its effectiveness, I once chipped out a frozen, sorry-looking shiner from a hole I had used the day prior, and minutes after smudging the beat-up shiner with a smelt wand, I caught a 3-pound largemouth bass!

If you’re tired of sacrificing perfectly good shiners to what seems like ponds filled with nothing but pickerel and emaciated, stunted bass, then it’s time to set your sights on what could turn out to be your own hawg heaven. And it just may be no farther than the closest trout pond.