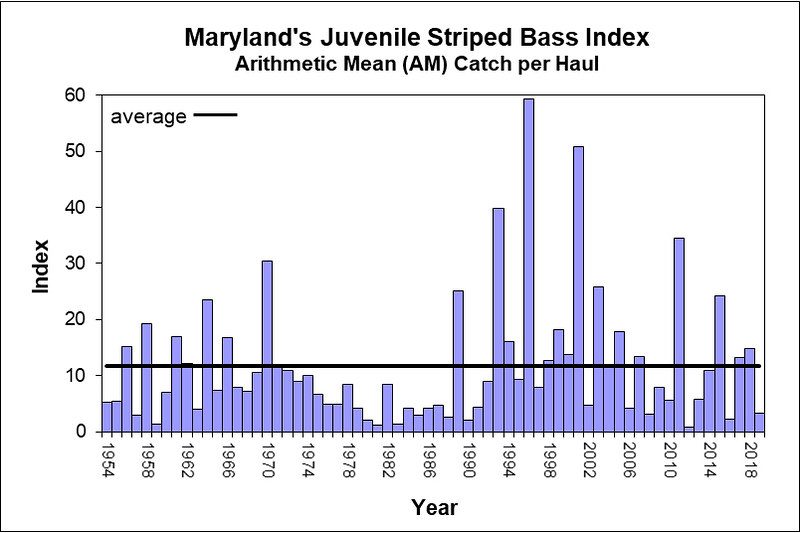 Some not-so-great news for striped bass, which were declared overfished this year. The Maryland Department of Natural Resources announced the results of the young-of-year striped bass survey, which tracks reproduction of the species in Chesapeake Bay. The 2019 juvenile striped bass index is 3.4, below the 66-year average of 11.6.

The index represents the average number of recently hatched striped bass captured in samples taken during the survey.

Weather, river flows, and availability of food for newly hatched fish are all important factors in the spawning success of fish such as striped bass. Although the specific cause of this year’s poor spawning has not yet been determined, large variations in annual reproductive success are normal for the Bay’s striped bass population. Typically, several years of average reproduction are interspersed with high and low years. While three of the past five years have produced strong numbers of young-of-year striped bass, the department is recommending continued monitoring and conservation measures.

“The Chesapeake Bay spawning stock is still capable of high reproductive success under the right conditions,” Assistant Secretary for Aquatic Resources Bill Anderson said. “We will continue to work with our partners along the Atlantic coast and implement measures to responsibly manage the Chesapeake Bay striped bass population.”

A separate ongoing long-term survey conducted by researchers at the Virginia Institute of Marine Science suggest an average year class of young-of-year striped bass was produced in Virginia tributaries of the Chesapeake Bay in 2019.  The program, formally known as the Juvenile Striped Bass Seine Survey, recorded a mean value of 9.54 fish per seine haul in the Virginia portion of the Chesapeake Bay, which is similar to the historic average of 7.77 fish per seine haul. The 2019 value—which scientists call a recruitment index—was also similar to indices observed in the past six years.