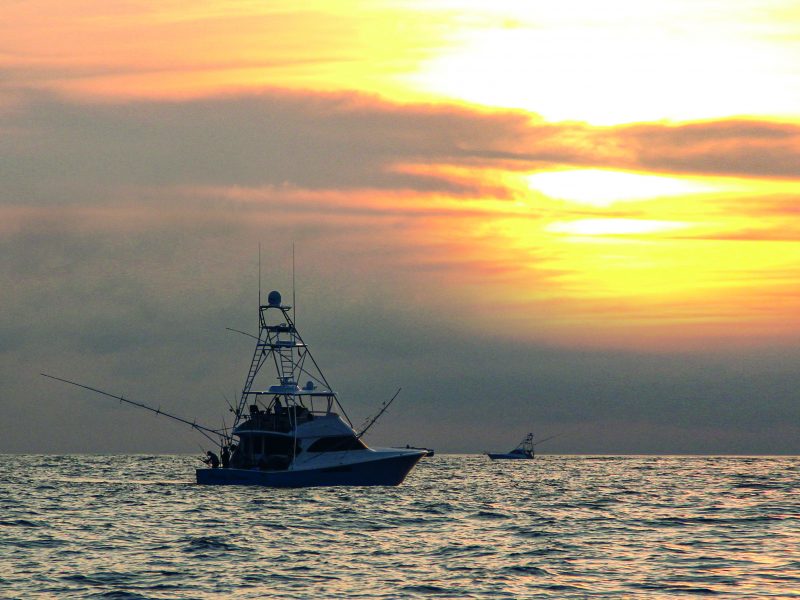 Fish in the Canyons put on the feedbag late in the season to fatten up on a variety of baits.

As much as I love the canyons during long, lazy summer days and short nights, my canyon-fishing heart beats with excitement when Labor Day rolls by. Our fishiest water of the year is typically in early fall as the combination of tropical storms pushing warm water inward collides with fall northerlies churning up shelf water and moving cooler water down toward the canyons. This pattern creates beautiful hard edges that often hold a motherlode of pelagic fish.

Come September, the summer day-trippers and boats dwindle by a third. Where a midsummer day has 50 to 75 boats packed in the hot canyon, in late September, you are unlikely to see more than 20 boats even on a perfect weekend window. By October, that number will dwindle to 8 or 10 boats, and by the end of October, I’m invariably alone on the edge. There is nothing like a clear, dark night 100 miles offshore without another boat in sight. It can be a bit unnerving to be that alone, but it’s also a wonderful experience to have 25 square miles of ocean to yourself for a 12-hour night.

Fish-wise, it’s on in September—yellowfin and bigeye tuna are in the warm blue water off the edge. Marlin, both whites and blues, will be with those tuna schools, mahi and smaller yellowfin will be hanging around the pot lines in 600 feet, and swordfish should be starting their migration south, making for great night or daytime targets.

Bait is thick if you find it. A fall night can bring thousands of squid and baitfish under the boat – the perfect attractant for the pelagics that hunt by night.

If the blue water is up on the flats or pushed further north into the 50-fathom line, you’re likely to find bigger yellowfin as well as white marlin and mahi up on that temperature break. I have caught monster wahoo in 300 feet in September in 68-degree green water a mile off the warm edge. I have caught yellowfin on either side of it. If the edge has weed lines near it, it’s invariably loaded with mahi. A swim beneath a weed paddy will reveal an aquarium of tropical fish clustered below, using the weeds as shelter.

My biggest marlin, a scary-sized blue, absolutely crushed our spread in 75-degree blue water in Veatch Canyon in late September 2012. Multiple 300-pound swordfish have come around the fall equinox. The crazy bigeye and tuna chunk bite in Fishtails happened in September 2014 and lasted the bulk of the month. Almost any day during that bite, 50 to 200 boats clustered in the Tails, each boat filling their fish box with 70- to 80-pound yellowfin and 150-pound bigeye.

It’s all on come September!

October can be even better. The shelf water has cooled into the low 60s and usually has receded off the edge. Wherever blue water is near or on the 100-fathom line, it should be game-on. While the troll bite may be off, if you can locate the schools of tuna and start chunking (either by day or by night), once the fish are under the boat, it will be nonstop action until your arms ache and your fish box is full. I have had 8-swordfish nights in October, most of them small and released, but usually at least one 125- to 150-pounder per night comes out of the rat pack.

In late October 2019, we found small yellowfin in 1,000 feet, about 5 miles east of Veatch in the last remnant of 70-degree water. At dusk, they started eating anything we put out: chunks, jigs, poppers. Smart guys that we were, out came the light bass tackle to chunk up the 25-pound tuna. That was great fun until a fat 66-inch swordfish jumped on a 6/0 wire hook and was unstoppable for over an hour before a tag team of anglers wore it down. We had previously boated 3 other swords earlier that day, so the light-tackle bonus sent us home with high-fives and smiles.

On October 4, 2004, we found a hard edge in 50 fathoms 20 miles north of Atlantis, with 72-degree blue water below the edge and 63-degree green water on the northern side. The temperature and water-color change was clearly visible in a miles-long weed line. A pair of 60-pound wahoo came out of the green water, fat 50- to 60-pound yellowfin were in the blue water a mile off the break, and a surprise white marlin came up and terrorized our spread as we trolled the weed line looking for mahi. What a day trip that was!

October is all about bait and bait fishing, if you can find an area with bait by locating birds, marking bait on the fishfinder, porpoise feeding, squid boats, or a cluster of other boats chunking away. However you find it, it’s time to pull up and start putting bait in the water, either day or night. Sure, it makes sense to troll the area for an hour, but the October bite is all about bait. Find the bait, get your chunk stream going, and prepare to hold on.

One of my most memorable nights was back in Hydrographers Canyon in late October 2005 on a friend’s boat. There was a hard edge, 73 degrees on the warm side, 59 degrees on the cold side right across the mouth of the canyon. We set up that night in the warm water and didn’t get much in the way of action. At 3 a.m., I woke up and started chunking heavily. Very soon after 10 pounds of bait had been rapid-fired into the water, rods started going off, and 50-pound yellowfin started hitting the deck. This went on for 3 hours to the point that we were just playing with the fish with hookless baits. The yellowfin were right under the boat, flashing up and eating each and every chunk we tossed in. The bite went right into sunrise. At some point during the hours-long free-for-all, one of us looked at the fish finder and was shocked to see we were in the 59-degree water bailing quality yellowfin.

Last fall, a friend of mine was out in mid-October on a rough night. He had tuna under the boat when his deep bait 400 feet down went off in a screaming run. The crew was all pumped because this was going to be the swordfish they had come for. Surprise!

When they got the fish near the boat, they saw it was an 80-pound wahoo instead.

One night in East Atlantis in 2017, there were 10 boats in a tight cluster at the tip of the canyon. Every one of them caught two or three swords that night. Many boats also caught big yellowfin chunking. At first light, both the morning chunk and troll bite for 50-pound yellowfin was unreal, with everyone catching. Again, it was warm water pushed up against the edge that created an all-night and all-day chunk bite. Plus, any boat deep-dropping had multiple swordfish bites. We had a big one at leader and lost it, turned around and reset our drift, and immediately caught a 125-pounder.

It’s not usually my thing, but when a daytime chunk bite gets going, there is also the opportunity for jigging and popping with light tackle. If you can get those fish 100 to 200 feet under the boat, you can pop them up. If they are 300 feet down, you can jig them up—the key is to get the fish under the boat, then you get to pick your poison for how to catch them most effectively and with the most fun.

Fall fishing is a lot of fun but it’s also no joke. The weather changes in mid-September; early September is a summer pattern with southwest breezes and gentle seas. By mid- to late September, the northerly winds start blowing and the sea can quickly go from 3 to 4 feet to much bigger within an hour. Proper weather analysis and planning is key to going out in the fall. By Columbus Day weekend in October, the day length is down to 11 hours. This means you have a 13-hour night to plan for and be prepared to ride out should it get rough. Plenty of flats of bait is a must during those long nights—as is a crew willing to stay up and work hard.

Traveling in the dark at high speed in the fall is dangerous because you don’t know what’s out there, and there’s no one to help if you have a problem. You are pretty much alone from the time you leave shore until the time you arrive on the edge. If I am travelling through the night, it’s at 8 or 9 knots to minimize any damage that could occur if I run into something.

If you plan to be out later than early October, you must be prepared for 20-knot winds and 4- to 6-foot seas. You’re on your own in case of a problem, and you must be prepared for almost any contingency. It can be wonderful to be out there all by yourself, but good weather analysis and a careful weather eye for the entire time you’re out are critical to having a successful and a safe trip. I use both Sirius weather as well as my own on-site observations to try and keep ahead of any potential change coming. If the sea state changes, if the wind shifts or picks up, ask yourself “Why?” and beware!

I should also mention safety and survival. It’s obviously very important at all times but is even more so for isolated trips you may make in the fall. I had one trip in 2018 when I was trolling the WHOI OOI buoys at dusk. A longline had tangled onto one and we ran over it. I didn’t see it until I heard the prop sound change. I have a single-engine boat and a line in the prop is beyond serious—potentially life-threatening in the dark. Luckily, I was able to reverse most of it out and then cut the bulk of the line off. However, I still had some in my prop and could travel only at idle speed.

I had to wait till the next morning until the sea state settled down before I could jump in the water, assess the damage, and then cut the remainder of the rope bit by bit out of my prop. Had I not had a snorkel, mask, wetsuit, and a spare air tank, I would have been in a bad way. You must be prepared; your boat must be at 100% to fish the edge in fall.

Another key tool is a reliable communication path back to the mainland. I’ve taken to the Garmin inReach in the past couple years as an emergency tool. It allows me to remain in contact with friends on land who understand where I am, what the weather conditions and sea conditions are, and what is coming. In addition to using Sirius weather on board, I also have someone watching my trip and my course, giving me a weather analysis 6 to 12 hours in advance so I can plan an escape if I need to. The days of being out there alone with no communication are behind me at this point. When I’m going, I want to make sure someone knows where I am, what my plan is, and that I’m going to keep in contact to make sure that plan adapts as to any changing conditions.

Fall fishing in the Northeast canyons can be spectacular. Pick your weather window, make your plans, gather your crew, get your bait together, and focus on piloting the boat to a location where there’s bait and fish. You’ll have the trip of a lifetime.