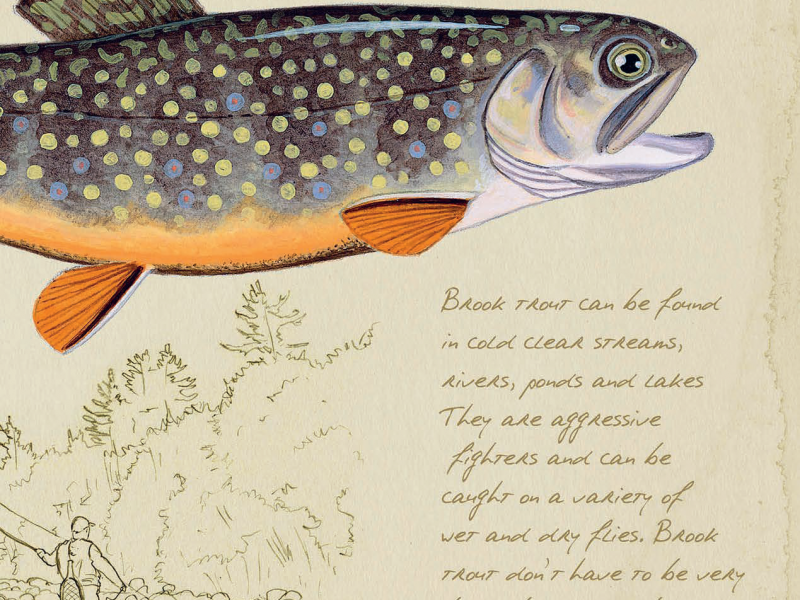 New Hampshire-based artist Matt Patterson creates lifelike illustrations of Northeast wildlife. Three years after receiving his degree from the Art Institute of Boston, Matt was contracted to write and illustrate a book titled Freshwater Fish of the Northeast. Matt teamed up with his father, David, who wrote the copy, and they traveled around the Northeast, fishing in the name of research for the book. Below, David Patterson shares the experience.

In the process of writing our book, Freshwater Fish of the Northeast, my son Matt and I went out of our way to catch as many different species of fish as possible and take photographs for Matt to use as references for his illustrations. That’s when we came up with the idea of a competition to see which of us could catch the most species of fish. The rules were easy: Catch a fish, photograph it, and immediately release it. Keep a record of each species caught, along with a photograph and the type of fish. If we weren’t sure what kind of fish it was, we’d use the photograph to help identify it.

We targeted many species that we’d never before tried to catch. One of these was the burbot, though in New England, it is most commonly called a cusk. The burbot is the only freshwater member of the cod family and is found in deep, cold-water lakes in northern New England and New York. In the summer, they reside in the deepest parts of lakes, usually down 100 feet or more. In the winter, however, they are very active and come out of the depths to spend their time in shallower waters. We went ice fishing, specifically to try to catch one, and we did.

Another species we sought was the banded sunfish. Although it is fairly common in ponds and rivers from southern New Hampshire into Connecticut, most people don’t know it exists. Its maximum size is only 3 inches long and, unique among sunfish, it has a rounded caudal fin.

These are just a few examples of the fun times we had trying to catch different species in the process of writing our book. Matt won the contest by a few species, by the way, and in accordance with the contest rules, I had to buy him a fish dinner.