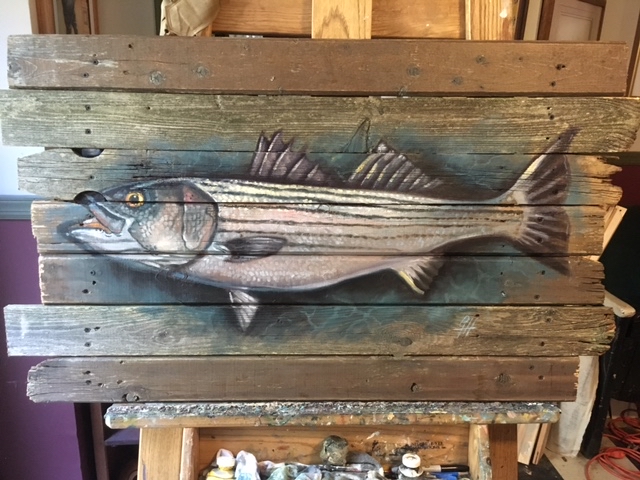 It’s no secret that the Northeast is home to some of the most beautiful coastal landscapes along the entire Atlantic coastline; from the rugged, rocky coast of Maine- to the flat, sandy beaches of New Jersey, the scenes of sunsets on the horizon and long-rolling waves along the shore are fan favorites across the board. These Northeastern landscapes and picturesque moments of winter sunsets, are what remind us not only of the grace and majesty of the ocean, but also of the places that make us feel most at home. Artist, illustrator and New Jersey native, Gregg Hinlicky has spent his lifetime capturing and reimagining the lifestyle he is most passionate about: a life by the water.

Gregg Hinlicky grew up in northern New Jersey, spending his summers and vacation time at the Jersey Shore with his family. There, Gregg spent his days crabbing, surfing and illustrating the beach scene. Occasionally he’d wet a line in the surf, but more often, he found solace in the barrels of crashing waves. After spending years driving south to visit the shore, Gregg met his future wife there, eventually moving closer to the coast, to Tom’s River where he continues to create and illustrate in his home studio.

Since a very young age, Gregg’s mother told him that he had a knack for drawing, and while he may not have known it at the time, his artistic abilities were a skill that would carry him through school and into his career. Gregg went through art school and began work in Manhattan providing creative illustrations and graphic design for advertising agencies, magazines, and more. He had worked as an Art Director for many years, and as a freelance artist on the side, before deciding to slow down and focus on what he really enjoyed doing for work: create. Gregg began to work in multiple mediums, projects creating sculptures, portraits, and more; he still works on sculpting with bronze to this day. As he began to shift his focus more to his passion for freelance illustration and painting, he recalled some of the work that kickstarted his freelance career as an artist, also kickstarting his sales with a local gallery as a teenager.

Gregg explained that while in art school, he would go down to the beach and find massive piles of driftwood, which he began to collect, and later utilize as rustic canvas. He painted ocean scenes, waterfowl, blooming flowers, and sandy landscapes, but it was only upon taking some of his completed driftwood pieces down to a local art gallery when he realized the value of this sort of creative art. Painting waves and rolling dunes across the local driftwood shards created a connection between the observer and the art that allowed them to (physically & metaphorically) bring a piece of the beach home with them. Gregg then began using old slats from wooden fences and repurposed them into flatter, more consistent canvas- while still managing to maintain the rustic, wooden, beach-house vibe that came with his paintings.

Over time, Gregg’s work became more established and renowned in the New Jersey area, and he was offered an opportunity by acclaimed outdoor photographer Tom Lynch to have his work displayed in the Angry Fish Gallery in Point Pleasant Beach, New Jersey.

“I’m in the studio every day of the week in some capacity, whether it’s working on a piece for someone or just to push some paint around” Gregg said. Although he considers himself a “semi-retired” full-time painter, he has a full-time desire to be a creator.

Gregg’s Distressed Wood Slats series illustrates where his life experiences, his character and his artistic ability manifest into a Coastal Series of work, full of pelagic fish profiles and crashing waves illustrated in such a way that they’re (ironically) calming to admire; when asked what is his favorite thing to paint or illustrate, he responded “There’s something about a perfectly cresting wave…”, and I could sense the surfer in him reminiscing of days in the salt down by Seaside Heights.