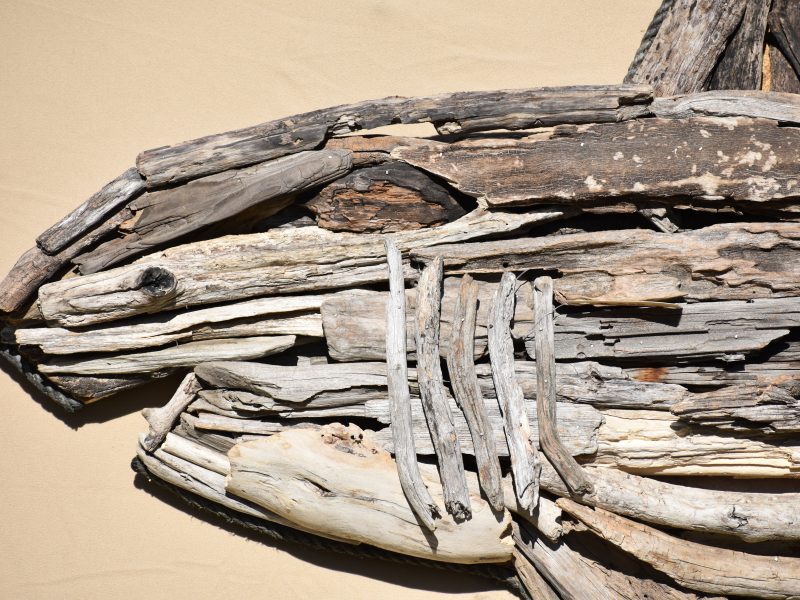 While walking through an art show in Chatham, Massachusetts, a few years back, Andy Matthews saw a great white shark created from driftwood. It made him think of all the driftwood he’d walked past in his 40 years of surfcasting along the North Shore of Long Island. When he returned home, he began collecting it to make creations of his own.

Matthews is a school district administrator with a master’s degree in marine science, and he has a deep love for the fishing and marine life around Long Island Sound. In winter months, when the fishing season slows, he turns the driftwood he collects into representations of his favorite species. “It’s like a jigsaw puzzle,” Matthews said, “trying to find pieces that fit and flow,” and making them into fish, crustaceans, and whales.

The driftwood Matthews collects is separated based on whether it will be part of the body, a fin, or an eye. “The eyes are hard,” he said.  He prefers to leave the driftwood in its natural state, minimizing any alterations to fit it into the piece. However, some pieces speak to Matthews immediately, like a section of driftwood that looked like a marlin’s fin, so he built a marlin around it. He even sorts the pieces by shade, giving his creatures the countershading (dark backs, light bellies) common among marine life.

By his estimation, he’s made around 20 different species out of driftwood, including fluke, mahi, marlin, squid, crab, lobster, blackfish, black sea bass, shark, and striped bass. Each creation is unique, made from driftwood that likely shared the water for a time with the species it now represents.

Finally, each one features what Matthews calls a “special piece of driftwood embedded in the design that bears the scars of human influence on the planet.” Matthews uses this sign to remind the viewer of the fragile nature of the marine world.

View more of Andy Matthews’ work at his website, longislandcreations.weebly.com