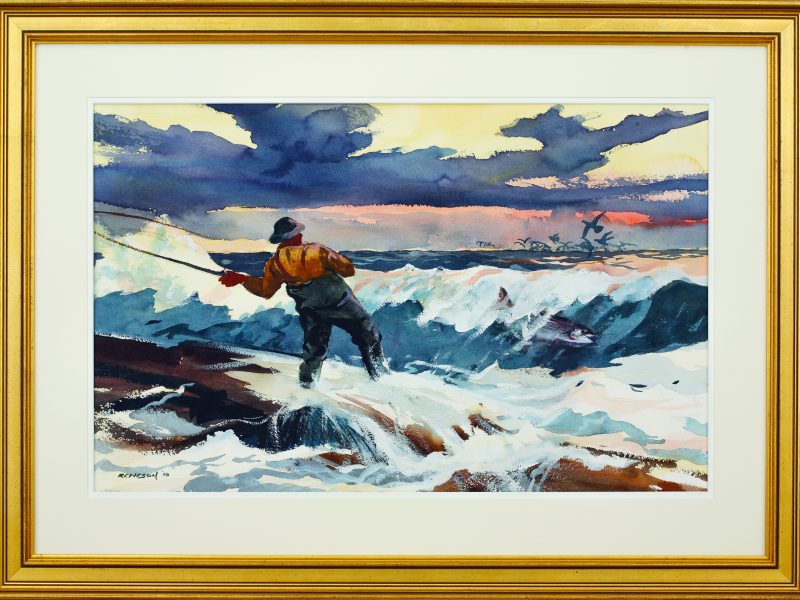 You may have come across a few of his paintings in Grey’s Sporting Journal and Sports Afield, or seen his illustrations thumbing through the Book of Knowledge. Considered a master of watercolor, Chet Reneson has dedicated a lifetime to the painting of fishing and hunting scenes from his outdoor adventures and experiences.

Reneson was born in 1934, when the country was just getting out of the Great Depression. He grew up on a pheasant farm that his parents operated on the outskirts of Colchester, Connecticut, and began painting scenes of deer and waterfowl at 9 years old.

After being out of high school for four years, he enrolled in the University of Hartford Art School on a four-year scholarship. Reneson met his wife, Penny, in 1958, while taking art classes, and they married two years later. Penny dropped out of art school to pursue a career in nursing; to this
day, she still runs and operates Chet’s art business. They have been married for 60 years, and live in Old Lyme, Connecticut, in a restored 225-year-old colonial home.

Chet is no longer doing shows or galleries, and most of his recent works are commissioned. He has stopped using watercolors, and now paints using acrylics. Viewers really feel like they are part of the scene because he paints from over 500 photos he’ll take of any given land or seascape.

Among his heroes are Homer, Cezanne, Wyeth, Hopper, and Van Gogh.

Chet has the distinction of being named Artist of the Year by Ducks Unlimited, Trout Unlimited and the Atlantic Salmon Federation.

He believes that there are two types of art: good or bad. Judging by Renesen’s career, it’s safe to say that his work is pretty darn good.

To see more of Reneson’s work, and to order a lithograph visit his website.