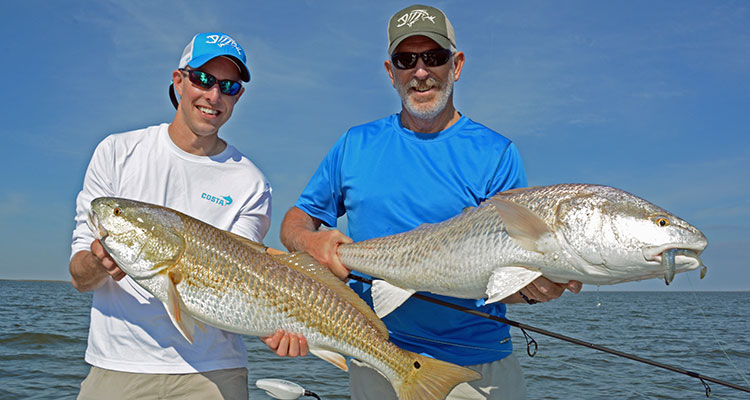 The pink-and-white-striped, cone-shaped popper looked ridiculous. Designed for offshore fishing, for fooling tuna and dorado, it had no business being on a skiff, no business chugging across four feet of water on an inshore flat. With every snap of the rod, the 3-ounce plug threw a curtain of water a yard ahead as it lurched forward. It was ugly, it was loud, it was obnoxious.
And the redfish hated it.

Without warning—no swirls, no V-wakes, no visible follows—the reds would explode on it from underneath, often batting it into the air two or three times in a row. They’d continue their attacks all the way to the boat until finally one would succeed in wrapping its underslung mouth around the lure’s single hooks.

I’d fished for redfish before, but they had never behaved like this. The redfish I was familiar with were copper ghosts on the grass-and-sand flats of southwest Florida, quick to disappear in a puff of sand and streak away from the delicate splash of a 1/4-ounce jig landing 10 yards away. To coax one into biting, I had to drift a live shrimp under a popping cork and wait patiently for it to be discovered.

As our guide, Captain Moe Newman, explained while fighting a 10-pound redfish, these Louisiana bull reds would sooner cruise by the shrimp and attack the popping cork.

That’s not hyperbole. The story behind the tuna popper began on a day when Moe was guiding a group of novice anglers and set them up with user-friendly popping cork and jig rigs, and big redfish kept trying to eat the corks. Moe happened to have a Shimano Pop Orca lure in her tackle bag, a sample that was intended to be used on the yellowfin tuna that swarm Louisiana’s offshore oil platforms. Hundreds of fish later, the beat-up lure has become Moe’s favorite for bringing bull reds to the surface.

I had been invited down to Louisiana in late October by Bruce Holt of G. Loomis rods. Ostensibly, he wanted to show off the new series of E6X Inshore rods, which he thought would be of interest to anglers in the Northeast. (Of course, we don’t target redfish in the Northeast, but the hard-pulling fish are a great proxy for striped bass.) However, on the hour-plus drive south from New Orleans, he didn’t talk tackle or even fishing. He primarily talked about how excited he was to introduce me to his close friends, the wife and husband team of Moe and Eric Newman, and their fledgling fishing operation, Journey South Outfitters.

Journey South Outfitters is located in Venice, Louisiana, the southern terminus of Great River Road on the west bank of the Mississippi River. Venice is a well-known launching point for sport fishermen, offering inshore fishing and easy access to offshore fishing in the Gulf of Mexico. I expected it would have some things in common with other end-of-the-road fishing destinations like Key West in Florida and Provincetown on Cape Cod, which have attracted artists, writers, and drinkers along with hordes of tourists and vacationers. Instead, Venice is dominated by oil-industry infrastructure and parking lots for the hundreds of workers who leave their cars and trucks behind when they head out for weeks at a time to work on offshore oil rigs and commercial fishing boats. There’s little in the way of tourist infrastructure, only a few bars and small restaurants that cater to locals, and the largest store is a discount Dollar General. There isn’t even a view of the Mississippi, because it’s held back by a massive levee that runs its length, creating a surreal backdrop as the top portions of massive commercial vessels and cruise ships glide by above the low-lying town along a false horizon of grass and earth.

Venice is still recovering from being almost completely destroyed just over a decade ago by Hurricane Katrina, which leveled homes, devastated the commercial fishing fleet, and displaced thousands of residents of Venice and greater Plaquemines Parish. Then, as the recovery of the region’s commercial fish, oyster, shrimp, and crab industry was beginning to take hold, it suffered a setback when the Deepwater Horizon oil rig exploded in 2010. Today, many residents who lost their homes to Katrina never returned; businesses still haven’t been rebuilt. While the area’s recovery is remarkable, it’s still in progress, and it remains to be seen how the identity of Venice will evolve over the next ten years.

Eric Newman has a clear vision of the type of fishing experience that Venice can offer. Instead of just a day-trip destination for folks who consider an outing a success only if they limit out and fill a cooler with fillets, Eric thinks that the region has the potential to grow its reputation as a destination for serious sport fishermen who define success differently. He is banking on drawing a clientele of anglers who want to challenge themselves, fish with fly and light tackle, and pursue quality over quantity, all while enjoying comfortable accommodations, southern hospitality, and great food.

So, he and Moe assembled a talented group of captains to supplement their experience and expertise, an arsenal of quality fishing gear, and a fleet of flats, bay and center console boats. They set up a beautiful lodge complete with multiple bedrooms, oversized leather sofas, framed fishing photography, and a screened-in outdoor bar with a flat-screen TV, a hibachi grill, and Yeti coolers loaded with ice and local Abita beers. With Eric’s years of experience in the restaurant business and Moe’s warmth and enthusiasm, the southern hospitality and Louisiana-style food is as much of an attraction as the fishing.

The next morning, we trailered Eric’s 25-foot bay boat a mile down the road to launch at the bustling Venice Marina. The marina leads out to the massive main channel of the Mississippi River, and we skirted the edges of all the commercial traffic as we made our way south before turning off into a narrower side channel. At one point, we passed five center consoles all anchored up along a 30-yard stretch of shoreline and filled with fishermen jigging the bottom. They were targeting the smaller, slot-size redfish under 27 inches of length, attempting to succeed in filling their daily bag limits. We continued on through a maze of channels toward flats that held larger reds—and we didn’t see another sportfishing boat the entire day.

The first spot we fished was Blind Bay, a wide-open stretch of shallow water at the edge of the Mississippi Delta that borders the open waters of the Gulf of Mexico. A flock of diving birds signaled a sign of life in one area of the bay. It was similar to the type of bird action that would lead to feeding stripers, only instead of seagulls, the birds were massive brown pelicans. As we slowly motored into the area, I saw a familiar sight—schools of menhaden flipping on the surface and occasionally disappearing in massive swirls.

I picked up an inshore baitcasting setup and pitched a Strike King Redfish Magic, basically a saltwater spinnerbait, into the middle of a pod of nervous pogies. As soon as I got the lure’s Colorado blade spinning, it was slammed by a mystery fish and Power Pro started peeling off the reel. Meanwhile, Bruce, who was casting a soft-plastic swimbait, battled a big redfish that was thrashing on the surface in between powerful runs.

Bruce released the redfish and was on to his next one before I could get the big jack crevalle under control and in the boat. It had completely mangled the wire spinnerbait, so I switched to a spinning setup and joined Bruce in fishing paddle-tail swimbaits.

For about an hour, we stayed with the pogies and caught and released redfish from 30 to 36 inches in length. Eric wanted to show us something different, so we left the fish biting and headed toward a protected bay lined by tall marsh grass called roseau cane. The idea was to try some sight fishing in the shallows, but the waters were a little too roiled by a recent storm and not quite clear enough for spotting reds. We could, however, see schools of mullet just below the surface, and every few minutes a blowup would reveal the location of a feeding red. A quick cast to the area with a Redfish Magic or a swimbait usually led to a jarring hookup.

On the second day of fishing, Bruce and I ventured back out with Captain Moe and her first mate, a yellow lab puppy named Clotile, aboard an 18-foot skiff that would allow us to pole through a chain of small backwater ponds connected by skinny channels. We found plenty of log-sized alligator gar and a few black drum hanging in the clear water, but we didn’t spot any schools of redfish.

After striking out in the morning, Moe had another idea. We staked the boat in an area where wind from the approaching storm was pushing water through a constricted spot between two larger bays. Moe made a test cast with her Pop Orca plug, and a ferocious strike, followed immediately by a victory yell from Moe, told us that the redfish were in the vicinity and willing to strike topwater plugs.

Moe passed the rod off to Bruce, happy to sit atop the poling platform with Clotile, narrating the action and screaming with excitement as reds hammered our topwater plugs. I found success with a black Zara Spook, a more traditional inshore plug, while Bruce continued to draw violent strikes with the Pop Orca tuna lure. The most exciting moment came when a monster redfish slashed at the plug by the side of the boat, just as Bruce was about to lift it from the water. Without any room to keep the plug moving, he simply swung it in an overhead arc and slapped it back on the water. In a fraction of a second, the redfish, still lurking next to the boat, pounced on it.

By the time the storm drew close enough to chase us off the water, we’d caught and released over a dozen big bull redfish. The next morning, I would be on a flight back to Boston replaying all the spectacular topwater strikes etched into my memory. But, at that moment, all I could think about was getting back to the lodge to have a cold drink and start planning a return trip.