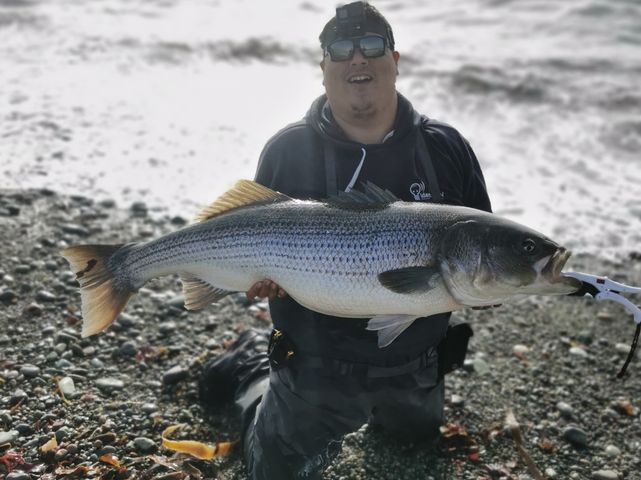 Larger numbers of stripers have taken up residence in the northern Atlantic Ocean waters of Maine and southern Canada in recent years, and anglers like Skyler Jeddore have taken notice. Jeddore has been fishing the beaches of Nova Scotia for 8 years in search of stripers.

As the 2020 season was coming to an end, Jeddore says he noticed the unseasonably warm November weather forecast, and told his wife he was going to make one last trip to the Nova Scotia coast.

After a 1-hour drive, Jeddore says he unpacked his gear, changed out the terminal tackle on a 5-inch Yo-Zuri Mag Darter, and packed it in his plug bag. A 15-knot southwest wind created a small surface chop and white water, which makes for ideal striper conditions in November, Jeddore says.

Around 11 a.m. Jeddore stepped into the surf with a needlefish, and on his first cast he hooked into kelp. As the tide continued to ebb, Jeddore clipped on the Yo-Zuri Mag Darter with new hooks and split rings. He cast the Mag Darter and began retrieving. Jeddore says the plug was roughly 20-feet away when he hooked into a fish.

It made a humongous run, peeling off an estimated 100-yards of PowerPro braided line.

After tightening his drag, Jeddore was finally able to get control of the fish. In 48-degree water, he battled the fish for 9-minutes and 35-seconds, all of it captured with his GoPro.

With the help of a wave, he beached the fish and quickly measured the length and girth of the striper. 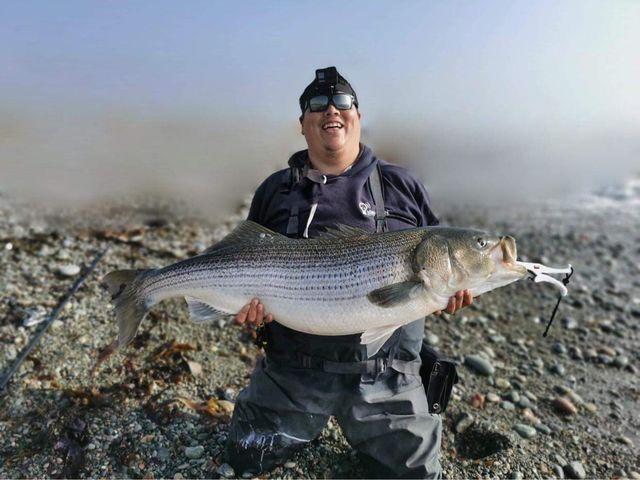 “She stood up on her own and shot off like a bullet,” says Jeddore, who measured and released the fish with the help of a friend. Jeddore says he and his friends have landed many stripers over 40-pounds in Nova Scotia.

The current Nova Scotia Striper Catch and Release record is held by Matt Young, who caught a 41-inch x 27-inch striper in 2005. Jeddore says he called Young, who congratulated him on the new unofficial Nova Scotia record, upon further review.