Every couple of years, I feel called upon to write a diatribe about what passes for clam chowder in many, if not most, local restaurants. What is served is often a thick white paste containing canned clams and – horror of horrors – chopped canned or frozen potatoes, along with a few onions and a sprinkling of stale paprika.

Some boast of their chowder being thick enough to stand up a spoon. Any chowder that will stand up a spoon is not worth eating, in my not-so-humble opinion. I find these concoctions to be abominations unfit for man, and only maybe fit for beasts.

In France, you are not allowed to label any loaf as “bread” if it contains anything beyond these ingredients: flour, yeast, salt and water. I would like to see a similarly restrictive list of ingredients for any soup called clam chowder. The ingredients should be limited to clams, potatoes, onions, salt pork, butter, flour, some form of milk, and seasonings.

I recently heard a lady from Nantucket on the radio expressing her outrage at people putting adulterants like celery and leeks in their chowder. She even found the use of cream in a chowder to be pretentious. Chowder has been a mainstay of the diets of Nantucket’s denizens for centuries. In Herman Melville’s classic novel of the whaling trade, the protagonist, Ishmael, and his cohort and harpooner, Queequeg, board at an inn on Nantucket before sailing. The men were offered two dishes, both chowders. The only choice was clam or cod. You can bet that you couldn’t stand a spoon up in either one of these. If you could, you would have mutiny on your hands.

I don’t want to discuss the clam-flavored tomato soup served in Rhode Island and points west to Manhattan, and I don’t refer to them as chowder at all. It can be a fine soup, but it is not a chowder in my world.

Here, once again, using the ingredients I have listed, is my recipe that my old, now dead friend Captain Gene Crocker, tugboat man, described as “clam chowder the way God meant it to be.” 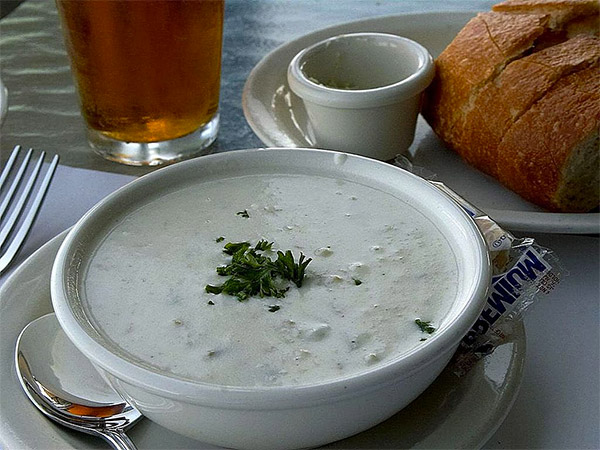 I like to steam the clams myself so that I have clam broth in which to boil the potatoes. If you do not make your own clam broth, use bottled clam broth.

In a heavy kettle, render salt pork over a medium flame until opaque. When enough fat has been rendered, add minced onion and sauté until opaque. If you like a thickened chowder, now is the time to add flour to your salt pork and onion mixture to make a roux, stirring at least two minutes to cook away any floury taste.

While you have been doing the above, you should have your potatoes boiling in clam broth. Add your boiled potatoes and the broth they cooked in to the roux and stir until smooth, then add the ground clams, pepper, and Tabasco. There you have your chowder base.

I like to thoroughly cool this base and refrigerate it overnight, adding the milk and pinch of thyme just before serving. Be careful not to boil your chowder, as it might (will) separate.

I like to serve the chowder in a warm bowl to which I have added a pat of butter, sprinkled with a bit of paprika.

I was saddened to read recently that Maine sea biscuits, which are thick, round crackers, are no longer being produced. These crackers were added by the diner to thicken a chowder, but alas – they are no more. Oyster crackers or saltines can partially fill the void left by the sinking of the sea biscuit. 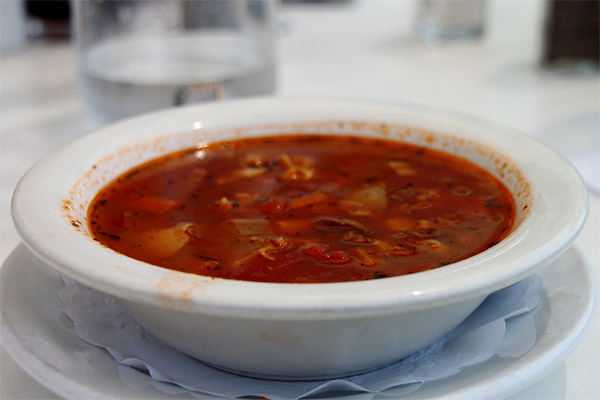 In the current trend toward seeking national unity under a new political regime, I think publishing a recipe for Manhattan clam soup, often erroneously called chowder, is in order. This recipe can be found in The Silver Palate Cookbook by Rosso and Lukins.

Melt butter in a large pot. Add onions and celery and cook covered over low heat for about 20 minutes, or until lightly colored. Add all remaining ingredients except clams and orange zest, and bring to a boil. Reduce heat and simmer for 30 minutes, until potatoes are very tender.

Meanwhile, scrub your clams and steam open; use about an inch of water in the bottom of a pot just big enough to hold them. Drain pot, saving clam liquid for future use. Remove clams from shells and grind, mince or process until desired texture is achieved.

Add clams to other ingredients, taste for seasoning (I like to add a little hot sauce), and serve with orange zest on the side for optional garnishing. Crackers are also appropriate here.

I wonder if Captain Crocker is turning in his grave, having been mentioned in a column alongside Manhattan clam chowder!

Master Thy Chowder
Whether you call them blackfish or tautog, these goofy-looking bottom fish make for a great chowder.

Other Great On the Water Recipes

Cooking The Catch 1 & 2 Combo
Get both of these well written and resourceful cookbooks for one reduced price. Hundreds of great recipes for local seafood.