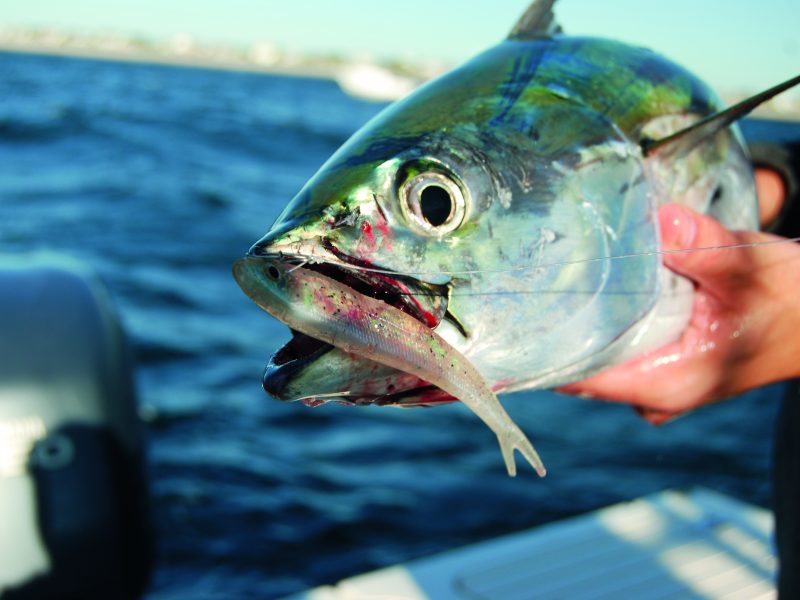 When early fall rolls around, the words I want to hear coming out of my mouth are “Reel! Reel faster!” This is a sure sign that albies are on the scene and some drag-screaming fun is about to begin.

Article: How to Catch Albies

Every seasoned angler knows the albie fishing drill when these pelagics pop up. They appear, and just as quickly, they pull a Houdini act, only to pop up again 50 yards away.

To best predict when an albie blitz will begin, anglers look for three primary factors to put the bait on the move:

Mullet, spearing, snapper blues, anchovies, peanut bunker, sand eels, juvenile herring, and squid may all be present. Ravenous albies descend on these baitfish and the ocean waters boil and froth with fleeing bait and feeding gamefish while gulls and gannets pinpoint the carnage from overhead.

The false albacore that feed in inshore waters each fall usually range from 3 to 8 pounds, but they can weigh as much as 12-13 pounds. The large, 15-pound-plus specimens caught on the tuna grounds during the summer don’t seem to take an inshore route on their way back down south.

An albie is football-shaped and has wavy, dark lines on its iridescent, blue-green back. Four to five dark spots below the pectoral fin helps distinguish it from the Atlantic bonito. Albies are not, however, in the tuna family. These pelagic speedsters are more closely related to mackerel. They have dark red meat that most consider too oily for table fare. Though a few fishermen have devised ways to eat albies, the vast majority are content to release their catches.

If you target albies with striped bass lures, you won’t have much success. Most striper lures are too large to properly imitate the small baitfish albies focus on. To catch them, you must size down your offerings to smaller metals and soft plastics with thin profiles. However, one of the problems with sizing down is that casting distance is often sacrificed, but there are a number of metals on the market that cast well despite their small size.

Probably one of the best producers year to year is the Deadly Dick. This metal is long, thin, and flies a very good distance with each cast. (The #3/4 long is the size to get.)

Newer epoxy jigs, modeled off the discontinued Maria jigs, are also excellent, especially in the 3/8- to 7/8-ounce sizes. Other productive metals include the ¼-ounce Acme Need-L-Eel, ½- to 1-ounce Crippled Herring with the single hook, ½-ounce Hopkins, 1-ounce Luhr Jensen Stinger, and 60- to 80-gram Nomad Streakers.

A soft-plastic bait, such as the Tsunami Split Tail minnow or an Albie Snax fished on a ¼-ounce jighead or Owner Twistlock Beast hook, should also be part of your arsenal. They won’t cast as far but when metals aren’t working, I throw these. I like soft baits in pearl, pink, or white.

Regardless of what lure is tied on, the best presentation is to cast out as far as you can, let the lure sink below the surface for about five seconds, then speed-retrieve back. If you don’t get a bite, try using a slight pause after every tenth crank.

While albies can be maddeningly picky, there is one presentation that rarely fails to produce. The rig consists of a red-and-white wooden snapper popper tied directly to the main running line with a 4-foot piece of 15-pound-test fluorocarbon leader attached to a 2- to 4-inch Red Gill, fly, or weightless soft plastic. Cast it out and skirt it across the top of the water. The popper will provide the weight needed to cast to the fish (and the splashing will get an albie’s attention from a distance, while the Red Gill will draw the strike. You can also substitute a small fly in place of the soft plastic.

When targeting false albacore by boat, optimal conditions are smooth seas and light winds. When a large group is present, they will show on the surface as they corral bait and push through it. If you can drift along and stay with the school, you will have a banner day, hooking into one fish after another. Unfortunately, this is not always the case because albies are notorious for popping up quickly and then sounding again. As a result, most boaters engage in running and gunning. As the fish pop up within view of the boat, a small fleet quickly zeroes in on them, hoping to be the first to get a cast off. While this method can be effective, it does require a certain amount of boating etiquette.

Ideally, a boater should slowly and cautiously approach a school of surface-feeding albies and get well ahead of them after determining which way they are moving. The boater should then cut the engine and allow the boat to drift into the school. Any engine noise can quickly put the fish down, and when this happens, I’ve seen the etiquette of a fleet break down as boats begin racing each other to the moving fish. This leads to skittish fish and angry anglers. A slower, methodical approach is better, and if the other boats in the fleet aren’t abiding by this, move off and try to find your own school.

When albies are around, fly fishermen are in their glory because hooking one on a fly rod is probably one of the top fly-fishing experiences in the Northeast. Since a variety of baits can be around in the fall, carry a variety of flies and be ready for whatever bait is present. Your fly selection should include a good assortment of small flies, 1 to 3 inches long, as well as larger flies in the 4- to 6-inch range. There will be days when these fish can be highly selective, and the right fly will make the difference.

Fly colors are all white, tan, blonde, root beer, rust, blue, olive, or green over white. A small amount of flash should also be tied into your flies. I fish mine on a clear intermediate line with 8 feet of 15- to 20-pound-test fluorocarbon leader. I cast out into the school and use a two-handed super strip to retrieve the fly. If this fails to produce, I go to the more traditional single strip with a slight pause to try and draw a bite. I have also had luck just dead-drifting the fly through the school.

If false albacore are along the beach, you can be sure they are also on inshore lumps and ridges from 3 to 10 miles out. If you are going to anchor, set the hook so that you are sitting up-current of the highest point of the lump or ridge. As currents flow along the bottom, they collide with this sand mass and produce an upwelling, which is what the albies higher in the water column are attracted to.

To start, I tie off a 5-gallon bucket of frozen bunker chum that creates a slick over the high point of the lump. Optimum tide or current conditions are when current movement is from bow to stern. The chum will begin to lay a scent in the water, drawing the fish to the boat and within casting range.

I then spice up my chum slick with tossed baits – fresh spearing that I netted or bought frozen. Five pounds of frozen spearing is usually enough to last for about three hours. I may also use peanut bunker that I netted in the marina if they are available. Initially, I toss the baits heavily in every direction around the boat, but once we start to hook fish, I then toss only a handful of bait every minute or two to keep the fish interested. Chumming too heavily keeps the albies deep behind the boat as they feast on a free meal rather than bringing them up to it.

When you have the right combination of baits hitting the water, the albies often flash by and instantly pick them off one by one. You can also hook a spearing or peanut on a hook and freedrift it back into the slick. Keep pulling line out so the bait drifts back naturally. Depending on the current, a ¼-ounce egg sinker attached above a small barrel swivel may be necessary to get the bait to sink down into the slick. Again, use a 15- to 20-pound fluorocarbon leader. You can also cast artificials or flies back into your slick.

If the wind is light and the current isn’t strong, you won’t need to set anchor because you can slowly drift over the lump.

Trolling small feathers (black-and-purple is my favorite pattern), small metals such as Clark spoons or Drones with drails, or even small splash bars and Chatterlure side trackers will have reels singing in no time when pulled over a lump. I normally troll between 5.5 and 6 knots, but if bluefish are around, trolling at 6.0 to 7.5 knots will reduce the number of their bites.

I recommend a four-rod spread, but if the albies are thick, you won’t be able to get all of them out before one rod goes off.