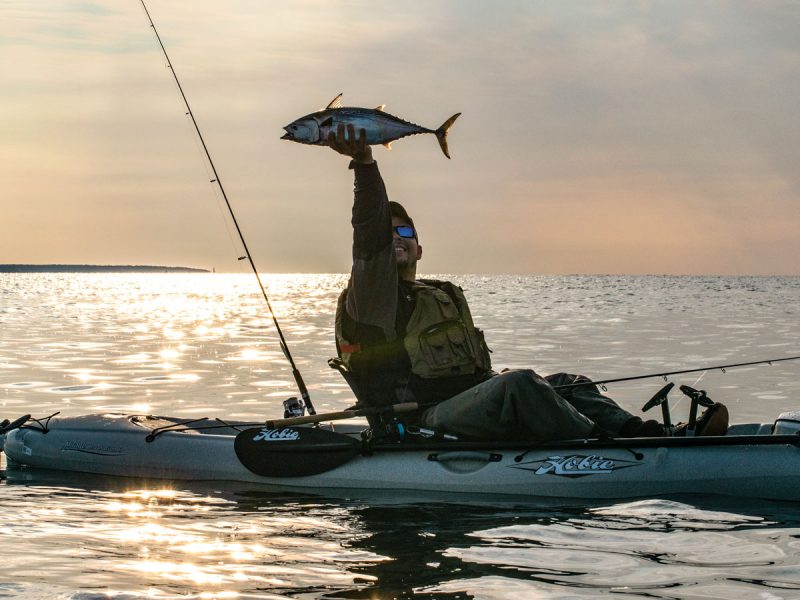 For the albie addicted, the 2017 season can only be described with superlatives. It was the best season most of us can recall, with the largest number of albies appearing in the greatest variety of places for the longest periods of time. On Cape Cod, we caught albies into November, and we caught them from boats, kayaks, and on foot, as they rushed into shallow salt ponds and deep inside harbors where you’d never expect an albie to appear. Thanks to some combination of environmental conditions, available bait, and sheer number of albies, they were racing along the surf line, cruising the edges of sod banks, and blasting through mooring fields and dock pilings.

While the season was extraordinary for many reasons, one thing that was typical was that the albies weren’t always easy to catch. When they arrived, they fed like bluefish, and a tin, swimmer, or topwater plug thrown into breaking fish rarely got refused. As the season progressed, the albies became more difficult to fool with the usual long-casting metals and jigs. They were even frustrating fly-fishermen, whose near-perfect matches of thumbnail-sized bay anchovies and juvenile peanut bunker were often ignored. At times, I found there was only one option that would consistently fool false albacore–a soft-plastic lure.

The magic of soft plastics for producing bites from finicky albies has been well known for over a decade. Back in the 2000s, the albie addicted spread the word on Internet message boards about the effectiveness of white Zoom Flukes. Rigged on offset worm hooks, these baits had lifelike action and just enough heft to allow anglers to pitch them to breaking fish. They were particularly popular with the growing legion of kayak fishermen, who could get closer to breaking albies without the fish-spooking outboard noise.

The advantage of soft plastics—their neutrally buoyant, slow-sinking, lifelike action—is also their biggest drawback. To be most effective, they should be fished with as little weight as possible, but their light weight makes it challenging to put them in front of albies, which are notoriously fast-moving and sometimes stay at the surface for only seconds at a time. When there’s a bit of a breeze, which is common in late summer and early fall when albies are around, casting a soft-plastic bait can be nearly impossible.

However, much has changed in the fishing world over the past two decades. Tackle manufacturers and local lure inventors have expanded the selection of soft-plastic baits available to anglers and introduced new hook and rigging options. Rod builders have come up with lighter, faster blanks and components that can launch light lures farther. And super-slick, low-diameter braided lines are a huge improvement on monofilament and the early iterations of “super lines.”

Soft-plastic baits, like the Fin-S Fish and the Zoom Fluke, originated as freshwater designs that were more focused on finesse than density or durability. As soft baits proliferated, manufacturers began producing deep-bodied saltwater-specific shapes with more heft, and local lure makers began experimenting with formulas to make denser soft plastics that packed more weight per inch.

As examples, look to the wide range of baits designed for saltwater species like redfish and sea trout. They tend to have deeper, more robust bodies that can hold saltwater hooks and have a little more heft for casting. They also come in a huge selection of colors that can match the prevalent baitfish.

Soft-plastic formulas also differ by manufacturer, which can have a big effect on castability, action, and durability. Most soft-plastic lures are made of a vinyl plastic formula that can be adjusted to achieve different levels of hardness. ZMan’s Elaztech formula is super-durable and can stand up to multiple bluefish bites. It’s also highly buoyant, so you can add more weight in the form of a jighead or swimbait hook for better casting and still achieve slow-sinking action.

Thanks to the growth of saltwater swimbait hooks and jigheads designed for soft baits, fishermen no longer have to jam nail weights inside their lures or pinch lead on to offset worm hooks to achieve a desired weight and action.

There are jigheads available that combine large, saltwater-strong hooks with light amounts of lead, a combination that was difficult to find ten years ago. And, thanks to the popularity of swimbait fishing, there are plenty of options in wide-gap saltwater swimbait hooks with various amounts of weight along the shank to achieve the desired heft and action.

Advances in rod materials and design have resulted in longer, lighter sticks that can cast ½-ounce lures, but also have the strength to land hard-fighting saltwater fish like false albacore. Most rod makers call these designs “Inshore rods,” typically designed for the Southeast fisherman with redfish, sea trout and snook in mind. An inshore rod tends to have a soft tip section for flicking light lures and a strong backbone to handle large fish.