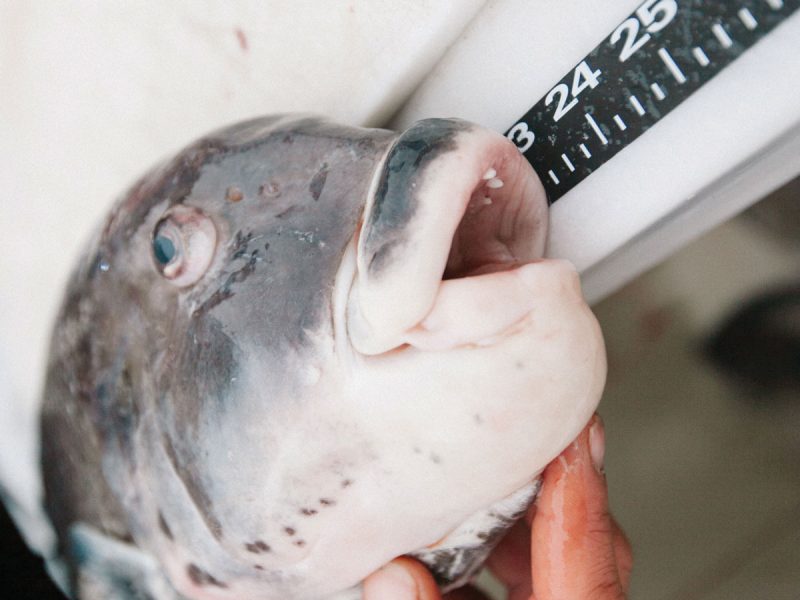 After the last plugs have been tossed at the southward schools of stripers, another diehard group of anglers is getting ready for their favorite time of the season. These are not warm days spent throwing back a cold one and catching some rays with a line in the water. These are days for a warm shot of brandy tossed back with numb fingers while intensely gripping a rod and hoping today’s the day you finally cash in. This is a game of inches, and every move counts. This is winter tog fishing.

Right now, only tog-obsessed anglers occupy the waters—anglers who embrace the pursuit no matter the conditions. I’ve gained more knowledge fishing with people from December through February than the other nine months of the year combined. I’ve met lifelong friends, learned tricks that made me a better fisherman and, most importantly, passed on the love of fishing to others who enjoy this chase as much as I do.

Tog fishing requires patience, perseverance, dedication, and attention to detail. From setting the anchors and knowing when to move… to tying your rigs and baiting your hook… you must be on point.

Knowing where to fish is only half the battle when winter tog fishing. You must be able to properly navigate and situate the boat over the structure to be truly successful. I’ve spent many blackfish trips standing on one side of the boat watching guys swing fish after fish over the opposite rail – tog fishing is that finicky and frustrating, at times. However, there are a few tricks to help minimize the dreadful days, beginning with anchoring over a piece.

While one anchor can get the job done under ideal conditions, if you’ve committed to leaving your boat in the water during these blistering cold months, you’re probably serious about winter tog fishing. In that case, it’s worth the extra time and money to invest in a two-anchor system.
To set with two anchors, start by circling the numbers you are targeting and hit the mark button when you find the sweet spot you’re looking for. Some like to use a visual aid by physically placing a marker on the spot. This can be done by tying a floating buoy to a heavy sash weight with the appropriate length of line between them and dropping it right over the hole you intend to fish. However you decide to do it, make sure to double-check the drift conditions before dropping anchors. If not, your mates might mutiny when you repeatedly ask them to reset the anchors because the captain had one too many warm shots of brandy and made a mistake. I’ve been on both sides of that argument, and nobody wins.

Steam approximately 150 feet up-current and wide of your mark. Drop the first anchor and then back down toward your mark. Once you’re satisfied that the hook has bitten in, carefully climb back up perpendicular to the first anchor, being mindful not to pick up the scope in your prop. Drop a second hook, and again back down to your mark, creating a “V,” with the two anchors being the top of that V and your vessel being the bottom point of the V.

Done properly, double anchoring provides complete control over your positioning. Getting it right takes a little patience, some trial and error, and possibly even a sacrificed trip or two, but it will pay off eventually.

Don’t worry if you don’t initially stop directly on your mark. By letting out scope on the port or starboard anchor, you can swing side to side, climb up or down a piece, or combat the changing conditions. And, initially missing the mark can sometimes be beneficial. Although you may have scouted a good spot, fishing some other areas could also produce quality fish. As long as you’re marking structure, make a few drops and see what lies beneath. You might just wander into the land of giants.

Gear is particularly important in this fishery. You need a rod with enough backbone to dig a bulldog tog out of the rocks, yet a tip soft enough to register the softest strike. A reel with a high gear ratio to quickly turn a fish away from the structure and a good length of topshot will allow you to confidently fish the sticky patches as well as quickly tie on new rigs (since breaking off is inevitable).

Equally important is a quality pack of hooks that can take a lickin’ and keep on stickin’. I prefer a simple dropper loop rig because it’s quick and easy to tie, and it registers even the slightest of bites. Start by snelling a 5/0 Owner Cutting Point hook to the end of your topshot. Sometimes I place a second, free-sliding Owner in between the snelled hook and the dropper loop to add a little extra hooking insurance. Then, roughly 8 to 12 inches from the hook, tie in a dropper loop big enough to thread around 6 to 12 ounces of lead. The idea is always to tightly hold bottom and stay in contact with your bait. Anything short of this goal will simply not do. 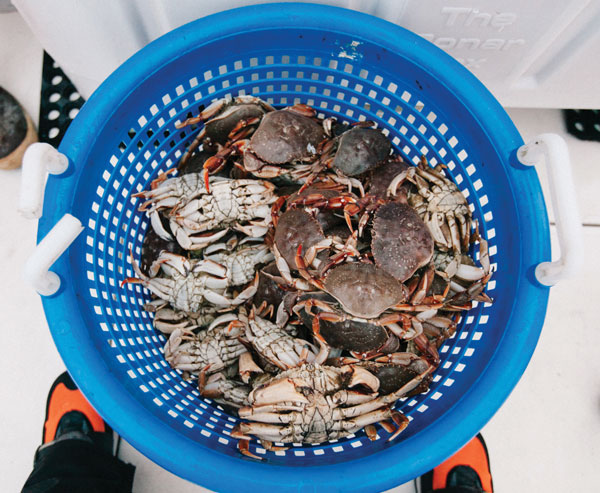 Once you’re confidently in the strike zone, it’s time for the great bait debate. There’s no question here on what to tip your hook with: green, white-legger, or hermit crabs. Ask three different tog fisherman and you’ll get three different answers on what bait to use. To be honest, they all work great at different time so your best bet is to have an assortment so you can match the hatch on that day.

I am methodical while rigging baits. Jumbo tog are savvy fish and will steal a poorly set bait or ignore it altogether. If you can find half-dollar-sized crabs, use them whole. If they’re larger, cut them in half. Try to vary the size and rigging methods since that variable can be the difference between triggering a bite or not.

I believe that tog attempt to immobilize a crab by first ripping at its legs and claws so I thread the hooks through the leg joints. This not only positions the hook in a great place, it provides a natural presentation. My objective is to maintain as much integrity of the bait as possible. If I can carefully peel the shell off a half-dollar-sized crab to reveal the leathery back, it’s game time!

Once you’re anchored, rigged, baited up, and most likely half frozen, take another shot of brandy and start fishing. It’s okay to swing for the fences at first because these bait thieves will drive you crazy until you get a feel for the bite. Try to get in tune with what’s going on down there. Slowly walk your sinker along the rocks and wrecks. Feel the drop-offs and crevasses where the fish should be stacked up.

Being a free-diver gives me a unique prospective into this world. I’ve swam with the fishes and lived to talk about it, so let me spill the beans. Tautog, especially jumbo ones, are cave dwellers. They don’t waste energy or time chasing food; instead, they patiently wait for it to waltz right through the front door. Anytime you’re walking a bait along the bottom and feel a hole, it’s worth exploring. And, since you’ll be properly anchored, finding this hole over and over shouldn’t be a problem.

Know the kind of structure you’re fishing or ask the captain what’s below. It could be submerged train cars, tanks, reef balls, rocks, or a wreck. Picture it in your mind, attempting to visualize which way it is lying, how far off the bottom it is at the highest point, and how to lure a fish out into the open. It’s not only fun to imagine, it’s productive. Learn the locations of the black holes that seem to swallow your rig every time you get too close.

Don’t be afraid to lose some tackle while you’re learning the structure. If you put in the work, you’ll start to sense a strike before it happens. Some people believe fishing is luck and some believe it’s science, but in winter tog fishing, it’s very much a game of inches.

Jeff Giovinazzo is the co-founder of 1B1K Adventures and co-captain of On Point Sportfishing. Their goals are simple: showcase, network and promote all those who make a living on the water. FishOnPoint.com