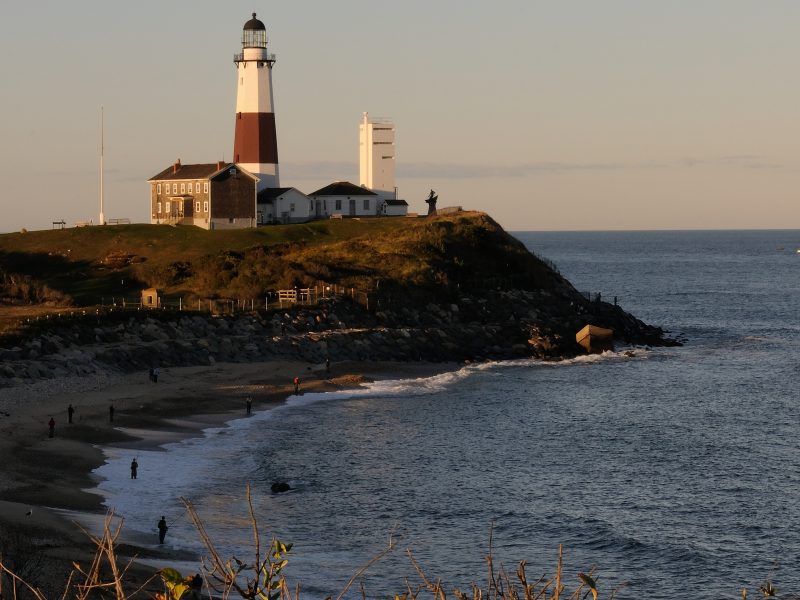 The colliding currents, big boulders, and sand beaches at the end of Long Island become a striped-bass playground from early summer to late fall.

When walking these shores, don’t ever be without a darter like the Super Strike Zig Zag. The seductive slide of this lure through Montauk’s currents has made it the last meal of many of the monster stripers that found their way to the scales at Paulie’s Tackle Shop.

On rare occasions when the wind and weather are too much for a darter, it’s time to break out a bottle plug, like the Ocean Born Flying Swimplug. Many Montauk 50-pounders have fallen to this lure style, which is made to cast far and dig into heavy surf with a thumping action that stripers can feel even in washing-machine conditions.

A bushy bucktail jig is another Montauk must-have, especially the Andrus Jetty Caster, which was specifically designed by Richie Andrus to hover over Montauk’s rocks.

Also in the made-for-Montauk category is the darter-bottle hybrid, such as the Northbar Bottle Darter, designed by Larry Welcome. This lure has the thump of a bottle and the unpredictable slide of the darter, making it great for fooling bass at its namesake spot on Montauk’s north side.

Don’t make the mistake of leaving behind a metal, like the Tsunami Chrome Diamond Jig with Tube Tail. When sand eels dig in on the sandy beaches just west of Montauk, you won’t want to be without this long-casting, slender metal.

For the daytime bite, a big splashy pencil popper, like the Gibbs Pencil Popper, can cover water and call up stripers, even when there’s no blitz in sight.

However, when a nor’easter churns up the surf, go for a topwater with a bit more calling power, such as the Super Strike Little Neck Popper. This lure cuts through the wind and leaves a crater in the water when it’s popped, making sure the big, storm-charged stripers see it.