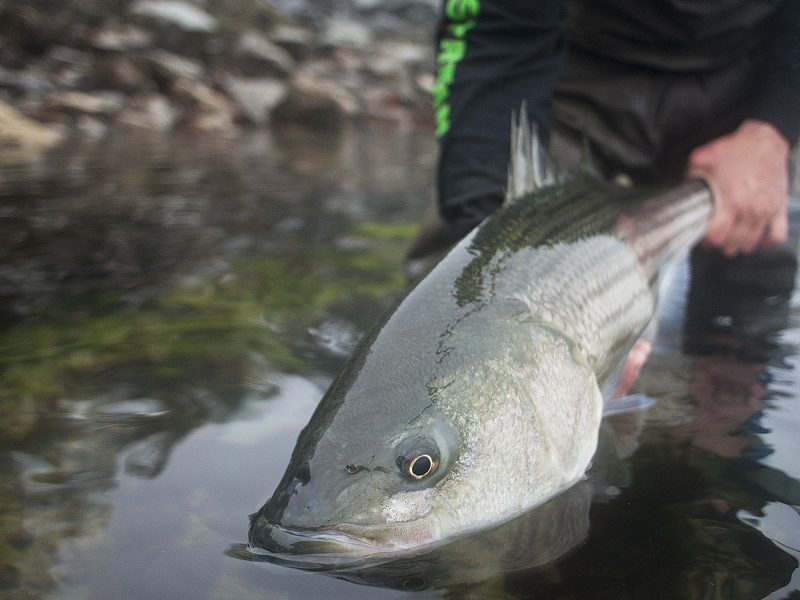 You’ve found a school of stripers well within casting range, feeding aggressively. Your hopes are high as you make the first cast. After a few cranks of the reel handle, with your artificial offering moving through the school, you tense up, waiting for the strike. And then…nothing. You guess it was just bad luck, but the next few casts produce the same result. Frustration creeps in. You vary your retrieve speed, change lures and colors, but an hour later, as the school begins to move away, you are still waiting for that first strike. What happened? And how do we adjust our striped bass fishing techniques to produce a bite amid such adversity?

Every year I hear of instances where schools of bass refused to hit anything thrown at them. I’ve had my share of disappointing outings, however, over the years, I’ve honed a few techniques that often convert that frustration into success.

On most occasions, when stripers are being extremely finicky, their feeding activity is taking place right near the surface. In addition, the water is usually either very clear or very off-colored, and baitfish schools are nearby. Under these conditions, my observations suggest that the fish are either seeing too much of a lure, or not enough of it.

1. Have a Need for Speed

Have you ever had a striper smack your plug as you hurriedly reeled in the last ten yards of your retrieve to make another cast? Or has a bass continually boiled, bumped, or rolled behind your offering without grabbing it? Oftentimes these things occur when the water is crystal clear and the surf is fairly calm. Under these conditions, a simple increase in retrieve speed may be all that is needed to trigger a solid strike. One outing, almost 25 years ago, gave me some insight into the effectiveness of speed. During that last week in September, false albacore consistently invaded the surf, and once a school of these speedsters were within casting range, all fishermen on the scene would start throwing metal or small Polaris-style poppers. The trick was to retrieve these lures as fast as possible. As a school pushed past me, I finally had an albie – or so I thought – explode on my popper.

As the fish thrashed for a moment, I soon realized I had not hooked my original quarry. After a few minutes, a hefty, 36-inch striped bass laid at my feet on the beach. Over the next hour, speedily retrieving the lure produced three more bass of similar size. An increase in speed can, and will, trigger strikes from stripers feeding in crystal clear water. The fast retrieve keeps the bass from scrutinizing the lure, and, if the bass are on the hunt, a quick retrieve will often arouse their predatory instincts.

Most artificial lures can be used at faster than normal speeds. The key is to use lures that maintain their original swimming action. Lures that tend to spin out with increased speed should not be employed. I’ve had good results with artificial lures such as a Bomber Long A, Cotton Cordell Red Fins, Yo-Zuri Mag Darter, Gibbs Polaris Popper, and Super Strike Little Neck Poppers, Tsunami Swim Shads, and Ava Jigs. I’ve even done well using surface swimmers like the Gibbs Danny at faster-than-normal speeds. Anyone who has witnessed a bass chase down a free-swimming bunker, herring or mullet can attest to the fact that stripers can catch just about anything that swims in their domain and will have no problem striking a fast-moving lure.

When stripers are being finicky about taking an artificial lure in clear water, and there is white-water created by breaking waves nearby, use it to your advantage. I’ve been lucky enough to catch fish, at times, along a crowded beach of empty-handed fisherman because I recognized that the bass would only take a plug in the limited white water available. Precisely timing my casts with the breaking waves and having the lure work on the back edge of the wash was the ticket.

Lures that ride high in the water column are usually best in the white water, however, sub-surface offerings like Tsunami Swim Shads, MagicTail Bucktails, rigged plastic eels and Daiwa SP Minnows also work well. The key is to keep your offering in the white-water wash that occurs closest to deep water.

Many years ago, after a successful fishing trip to Canada, I was confronted with a very problematic school of bass back home. Acres of stripers were slurping baitfish off the surface all around me in the dark, yet my plug came through the school without so much as a bump. I had a similar encounter with finicky walleyes in Canada a few weeks earlier, and wondered if the technique that helped me connect with the north-of-the-border walleye would work on these hometown stripers.

With renewed confidence, I put on a 20-pound-test fluorocarbon leader and tied it directly to the eye of the plug. I then made a cast slightly past the feeding fish and crawled the plug across the surface. I was barely retrieving the plug at all. My plug made only a slight “V” wake that I could make out in the dim light. With hardly any tension on the plug, a 16-pound striper exploded on it and shattered the peacefulness of the evening. Four more similar fish followed over the next hour before the school disappeared. I’ve used this technique with good results numerous times over the years. I’ve come to call it “the do nothing retrieve,” since there is very little forward movement of the plug. This has worked for me in very clear and very dirty water where fish are feeding right near the surface. I’ve had the greatest success with slim, buoyant like the Bomber Long A, Rebel Minnow, and Cotton Cordell Redfin. On some occasions, I’ve even scored with this method while using larger surface swimmers like the Gibbs Danny or Atom Junior.

4. Get Creative with Colors

Certain color patterns perform better under specific conditions when feeding stripers are reluctant to strike. In crystal-clear, calm-water conditions, I’ve had my best results using the most natural and subtle color patterns. Patterns and lures imitating the prevailing baitfish are the first to come out of my plug bag. With advances in modern manufacturinrg technology, some lures look almost life-like. Under cloudy-water conditions, I opt first for higher visibility patterns in yellow, yellow and black, red and yellow, or all black. Here, I want to choose an offering that will stand out the most in a murky environment.

Sometimes, when stripers are active toward late afternoon but are rejecting artificial offerings, a little patience can go a long way. Often, after most anglers have given up and gone home, the few that stick it out another hour into darkness are rewarded with the best bite of the day. The cover of darkness often turns nippers into strikers.

6. Get Down and Dirty

Although I am rather stubborn about abandoning artificial lures under most circumstances, the fact remains there will be times when quality stripers will only respond to the real thing. This is especially true when schools of bunker are being followed by big striped bass. At this time, a snagged bunker will often be the only offering that will take a good fish. The same can be true with clams, bloodworms, cut baitfish, and other live or fresh baits.

When stripers are in their lure-rejection mode, there are a few reliable tactics that always seem to save the day for me during the season. One tactic that has worked for generations of fishermen is the use of a teaser in front of the main lure offering. These little wisps of feather, bucktail, flash and plastic, or a combination of all, account for thousands of finicky bass each year. Bass often crush these tiny morsels with reckless abandonment, while ignoring a more substantial target. Although I primarily fish without using a teaser during the season, because they cuts down on casting distance, I always carry a few in my bag for special situations. These are a few techniques that have worked for me and other fishermen over the years.

Each year, a new tactic always seems to surface that gives fishermen another “trick” to fool a few more fish. Stripers are a great and unpredictable gamefish to pursue. They can thrill us one minute and drive us crazy the next, but by paying attention to the water conditions and the behavior of the stripers, we can often swing the odds in our favor when the bass decide to change the rules.