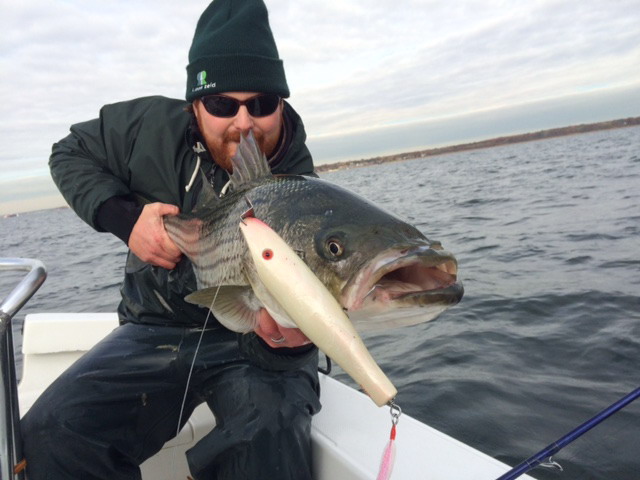 Big schools of bunker (menhaden) have made a comeback and fuel big-bass bites from the Jersey Shore to Long Island and from Mass Bay to Maine.

One lure that seems to have found a unique foothold in the New Jersey fishing scene is the Nichols Ben Parker Magnum Flutter Spoon. This supersized metal was adapted from freshwater use by Mike Gleason of TAK Waterman and put to work on Raritan Bay stripers.

The Drifter Tackle Doc is a must-have lure for anywhere, but it is especially essential anywhere large stripers are locked in on eating big bunker.

A large, deep-diving metal-lip swimmer, like the Big Water Lures Giant Pikie, is popular from both the surf and the boat as a match for big bunker. Swimming one through the middle of the water column or dropping it back into current rips puts it right in the path of prowling bass. (Title Image: courtesy of Big Water Lures)

Some days, it’s tough to beat a classic paddle tail shad, like the Tsunami Swim Shad. When bass are hanging deep below bunker, vertically jigging one of these shads can catch huge numbers of bass. While the 5-inch size will put up numbers, anglers hoping to weed out the schoolies should have better luck with the 9-inch model.

In deeper waters off northern New Jersey and Long Island, anglers willing to troll for their bass will have a tough time beating the Mojo Rig. This heavy leadhead and big shad combo has become a popular striper-trolling tactic over the past five years.

There’s always a place for a large soft plastic stickbait, such as the Z-Man HeroZ. Rig it on a jighead and fish it with a “snap-jigging” presentation, in which the rod is violently snapped upward and then lowered, allowing the lure to drop without resistance.

For fly-fishermen who want to best a true trophy, there’s no better time to do it then when bass are feeding on balled-up menhaden. You’ll need a big fly that you can actually cast, and that’s exactly the inspiration behind the Sedotti Slammer.

This article was originally published online in September 2021.