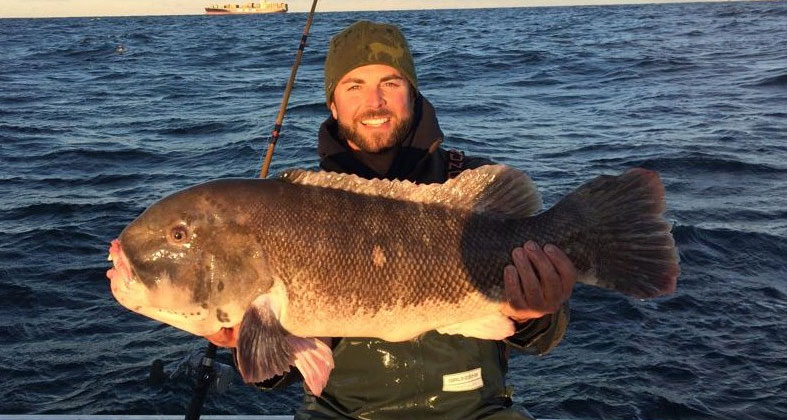 Try these top hotspots to warm up your winter bottom fishing.

Forget about striped bass and bluefish. It’s tough for me to say that, but you have to understand, when you get the feel for bottom bouncing and wreck pounding, it gets in your blood and becomes a passion. Plus, a love of this fishing keeps on giving throughout the year, and it makes it a bit easier to pry yourself out of bed in the wintertime chillness to head out 20 miles into the Atlantic Ocean to wet a frosty line. When you do wake up in the frigid mornings of December, know that a plethora of bottom brawlers such as cod, blackfish, pollock, sea bass and ling await your presence to test your skills. Here’s a rundown of the lucky seven spots where you can warm up by hauling in a respectable cooler of tasty bottom-fish fillets.

Bottom bouncers looking for ling, blackfish and the occasional cod love this spot’s dimensions, namely because the prominently defined subterranean mountains have an average depth between 20 and 30 feet. Also, on the north side lays a rock hill that abruptly rises from 42 to 15 feet – a wall of solid rock. On the western side of the Rocks lies an area called the Ribbons that rises up to 14 feet and undulates on the fish-finder screen. This is perfect for early-December blackfish.

Shrewsbury Rocks
This line of greensand rocks act as an oasis for marine life.

The far eastern edge of the Rocks is marked by the green bell buoy over 43 feet of water. An inside green can marks the 26-foot depth on the eastern edge of the main portion of the rocks. That’s the place to be for bulldog 8- to 14-pound blackfish in late December as these fish make their way offshore with the cooling water temperatures. Be careful here and bring plenty of extra lead, as there are tons of hang ups to hold your hooks and sinkers. Ling will also make a showing here, along with the occasional market-sized cod no more than 8 pounds.

“Ahoy! Drop ‘er to seventeen fathoms!” Invariably, that was what the old, salty dory fishermen said to each other as they hit the prolific area known as the 17 Fathom Bank. Seventeen Fathoms is nestled on the upper west end of the Mud Hole, right where the beginning of the Mud Hole starts grooving its underwater trench. Right on the spot, water depth runs from 94 feet down to 102 feet (or 17 fathoms), but the immediate surrounding area can vary in depth from 104 to 114 feet and even drops down to 128 feet within a half-mile to the east.

17 Fathoms
This extensive area has been a popular spot for New York and New Jersey fishermen for generations.

What makes 17 Fathoms so fish-friendly is the combination of shifting water depths combined with the eclectic bounty of bottom structure that blankets the area. It’s a veritable rocky road of natural broken bottom, with stretches of mussel beds, barnacles, snails, and clam beds. Then, on top of all the natural stuff is a massive amount of man-made material around the area, most notably the rubble from the construction of the Holland Tunnel and subway systems of New York City. The abundant structure below houses some formidable blackfish from November through early January. Ling, too, congregate there when the water temperatures hover in the 42- to 50-degree range. The concrete rubble and mix of structure at 17 Fathoms will rise 6 to 7 feet up off bottom, and it’s not considered a “sticky” type of structure, so you won’t lose as many rigs dropping down for tautog and ling. Also, don’t be surprised if you find a 15-pound-plus cod here.

The Shark River Reef has the largest volume of natural and artificial material of any reef site in the world. It was built 14.8 miles off the coast and provides incredibly diverse habitat and cover for a varied assortment of inshore and mid-range species. The entire area encompasses .72 square miles and harbors sunken tankers, tugboats, and cargo ships. The highlighted shipwreck of the reef is the 460-foot attack cargo transport USS Algol, situated near the reef’s south side. Other notable wrecks include the 160-foot oil tanker Sam Berman, the 250-foot sludge tanker Coney Island, and two 174-foot tankers. In 2003, the reef received a welcome addition of subway cars strategically spilled on the north and south ends of the site. The whole northeast quadrant of the reef site is fortified by 26 solid granite rock mountain ridges that jut up from the ocean floor, each one 500 feet long by 200 feet wide and 40 to 60 feet high. Wow! The eclectic combination of shipwreck, concrete, tire units and rock mountains hail fish from all around to come play in the playground.

The Shark River Reef is a year-round producer, and species shift in and out with the water temperature. When winter rolls around, sea bass, bergalls, the occasional cod to 15 pounds and bluefish own the site. As the water temperatures drop, medium-size pollock from 5 to 15 pounds and ling become the hot bite. These coldwater species will provide fishing opportunities deep into the winter, even in mid-40-degree water, though the presence of nuclear-sized conger eels and wide-mouthed ocean pout becomes more apparent in the cold conditions. Because of strong currents, bottom fishermen usually need to drop down at least an 8-ounce bank sinker and must be prepared to stack on up to 20 ounces of lead to hold.

It has been surmised that the Klondike got its name because as the Klondike Gold Rush of California was occurring, dory fishermen in New Jersey were doing a little mining of their own. Though the Klondike can’t be mined for gold, it can be mined for a variety of bottom brawlers.

Klondike
The Klondike got its name because New Jersey small boat fishermen felt as though they’d struck gold.

The Klondike is comprised of a heterogeneous mixture of bottom structure that has a ton of history. Mainly, the area is comprised of natural, porous rock that was formed by the hardening of clay 10,000 years ago. Sandstone anchors the area, and on some drops you will hook into a piece that will stick to your hook and come up to the surface. The area is dotted by clusters of rockpiles and semi-hard mats of mussel beds, with water depths running 46 feet on the north side to 80 feet on the east side. The underwater ridge runs east to west with a slightly north pull and is about one mile long. And in a stroke of good fortune, in recent years a barge filled with rocks and boulders intended for the Sea Girt Reef missed its drop point and inadvertently spilled its load over the inshore half of the Klondike area.

The Barnegat Light Reef is an incredible piscatorial playground with an area spanning .85 square miles and dimensions of 1¾ miles north to south and ¾ mile east to west. It contains tons of tanks, bunches of reef balls, concrete castings and some worthy wrecks, including a 40-foot crew barge, the 41-foot sailboat Antares, and a 42-foot tuna barge, all of which comprise a whole bottom-fish battleground.

You’ll cover ground that ranges from 46 to 58 feet of water for the most part, and the right recipe for success is to be keep in contact with the bottom when you bounce between all the various patches of tire units, tanks and concrete rubble. You can experience excellent sea bassing by dropping down clam baits. Sea bass that exceed 5 pounds will make a pit stop here as they migrate offshore. Blue-dyed squid strips are a good bet to use for sea bass here as well. Pay attention to the cluster of tanks that are submerged on the southwest side – it’s a haven for sea bass and early December tautog. The largest blackfish will stick tight to the tank units. You can spend an entire day on one tank and clean up on bulldog blackfish, but it’s better to move from tank to tank as the bite may become stagnant after excessive fishing pressure. Try to hit the edges of the tanks for your best shot at a white-chinned, 10-pound-plus tautog.

Lying in a 3 square-mile area 9 miles southeast of the Cape May Inlet is the jagged playground called the Cape May Reef. The reef is a manmade structure consisting of 17 wrecks, including the 106-foot clam dredge Laita, the 157-foot buoy tender Red Oak, the 165-foot Rothenbach barge and the 205-foot tanker Onandaga. The wrecks are spread out through the reef area almost evenly, with 10 on the north side and 7 on the south side. The rubble from the Ben Franklin Bridge is spilled about the north side, and between everything else is approximately 3,500 tire units and tons of reef balls, as well as tanks and subway cars. Altogether, this makes up a mind-boggling amount of structure. The plot itself is broken up all over a northeast to southwest pattern where the bulk of the sunken wrecks lie at the tips of the site. You’ll be plying waters that range from 48 feet on the northwest end to 76 feet on the southeast side.

C-MAP Hotspot: The Cape May Rips

The Cape May Rips
This series of shoals is one of the most productive places to catch bottom fish.

The name of the game here is blackfish and sea bass. Captain Sam Rescigno of the Mary M III pounds the Cape May Reef with a highly targeted strategy. The bridge rubble sections offer unlimited lairs for blackies to hide their bulldog faces. Make no mistake, it’s very sticky structure, with plenty of gaping holes for your sinker to fall into. You will be losing rigs. Rescigno usually likes to hit the concrete rubble first – with a purpose. The north end is shallower, and in winter months, he will target this area first because the water is often warmer. A smart approach is to bounce just of the edges of structure on the downtide side of the bridge rubble, tankers and ledges as a strong Cape May current wafts food over the scrap, where the blackfish will wait eagerly to pick the forage off the bottom and suck all the goodies into their bucktoothed mouths. November through January has the finest blackfishing, and a recent influx of cod has been staging on the reef in the last three years as well.

It’s a given that you’re going to lose a bunch of rigs on the sticky, jagged structure, so try to keep the rigs as simple as possible. With braided line of at least 50-pound-test, use an Albright knot to attach a 25-foot section of 30-pound-test monofilament. Double up a section and tie off at the top with a double-overhand knot. Loop on a bank sinker off the bottom. Three inches up from the bank sinker, pinch the line into a loop and loop on a snelled #6 Virginia hook. This rig allows a breakaway approach, so you can simply loop on another sinker when it gets busted off. You’ll go nuts breaking and retying sinkers, but you’ll save your sanity by eliminating the insanity of constantly tying on completely new rigs. When a sinker busts off, simply retie the broken section with a double-overhand knot and put on another sinker. Simple enough. This place is awesome. Tautog heaven. Feel your way through the ledges, and drop two anchors if you can to pinpoint a spot on the reef.