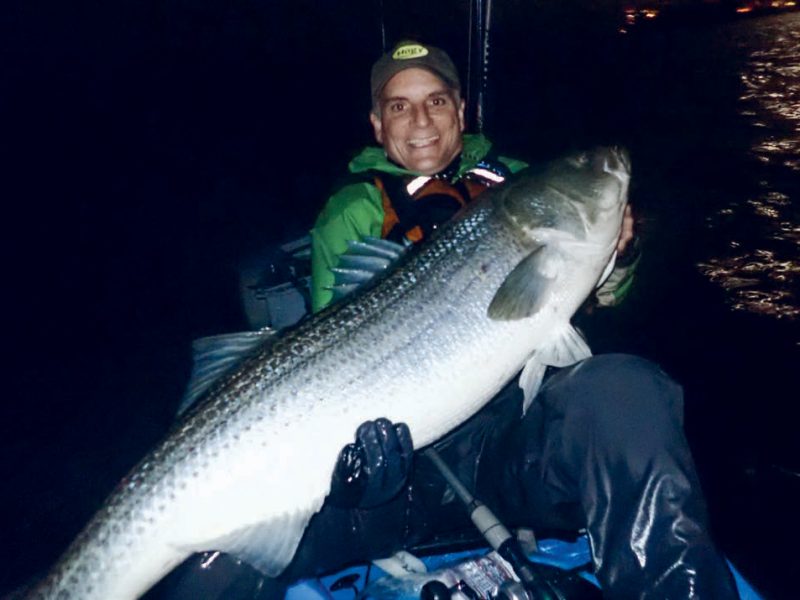 My kayak rides on top of my car year-round, so it gets snowed on in the winter and too much sun in the summer, but it is always ready to fish. When I’m not going fishing, the kayak draws the attention of passersby, especially when people think that it is too cold to go fishing. I get plenty of questions about safety and fishing, and every saltwater fisherman I talk to asks whether I use the kayak for stripers.

To the uninitiated, a kayak might look like too small of a platform for chasing stripers, but I argue that kayaks are a superior platform for many tactics. I can take my kayak to areas surf fishermen can’t access and I can fish in shallows and over reefs that are too risky for boaters. I bought my first kayak when my surf-fishing trips were getting too demanding.

I had a 3-mile mile run of spots that I hit and invariably there were areas that I couldn’t get to because of the tides or slippery rocks. With a kayak, I was able to do a “reverse surf-fishing” trip, where I fished the same locations but from the other direction. I quickly found more spots and was able to fish on any tide—for example, there was a boulder field that wasn’t accessible from shore and had too many exposed rocks to be fished from a boat. That was a bread-and-butter area for many years, always producing on my favorite tide.

One of the great things about stripers is that they can be caught with so many different techniques, some of which are best applied from a kayak. For those who like to troll, it is hard to beat a kayak for either live eels or tube-and-worm rigs due to the kayak’s ability to go slowly and stay tight to structure and snags. Whether you are pedaling or paddling, it is almost effortless to keep a 1.5-mph trolling speed, which is ideal for these baits and difficult to do in a motorized boat. 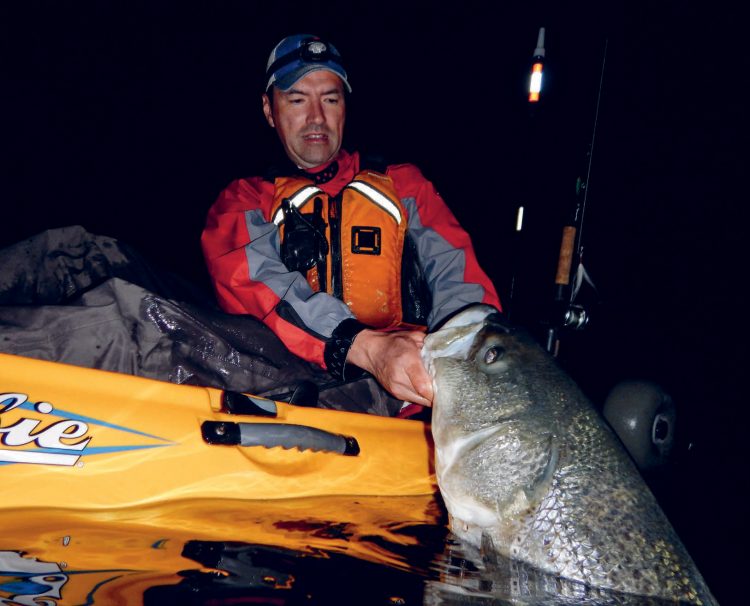 My chosen approach, drifting and casting plastics, is a time-tested technique whether done from surf, boat, or kayak. The advantage of the kayak is that I can shadow schools of bass without spooking them, following them as they move through the tide, especially when they head shallow. I think boaters underestimate the number of quality fish close to shore. Big fish set up in very shallow water— I’ve pulled many quality ones from two feet of water or less. One memorable night, I was working a 14-inch weightless soft plastic along the 5-foot line and getting smaller fish, but I knew there were bigger fish around and started moving closer and closer to shore. I found a pod right on the beach and landed three fish over 48 inches, one after another.

[Video: How to Rig Soft Plastics for Stripers]

I’ve always been amazed at how stripers react to kayaks. I often find fish that don’t spook at all, even when I’m right on top of them, and I often have fish swiping at my lure as I lift it out of the water. More than once, I’ve had them bang into the kayak while chasing my bait. It is always a surprise to have a large fish slam into the kayak at 2 o’clock in the morning!

Kayaks also excel in rips, especially pedal kayaks, which are much better than paddle kayaks for dealing with current. However, kayakers must be prudent in their choice of rips. Leave the fastmoving water and standing waves to the boaters and choose the moderate rips. Boaters often drift back and forth over a rip, so their motoring through it often puts the fish off quickly.

I fish one location where the boaters line up above the rip line and drop their baits into it, though once 4 or 5 boats show up, the bass invariably move off to one side of the rip. This allows me to slide in with my kayak and pick at the fish that have moved away from the boats. On many nights, the boaters have no idea how good the fishing is 100 yards away from them.

A pedal kayak allows me to hang along a rip line, walking the kayak back and forth along the structure. I use an up-current cast and retrieve my plastics just over the structure that creates the rip. Fish usually hang right behind the structure, but active stripers often feed on the up-current side of the rip structure.

I’m often asked about handling big bass from the kayak, but it isn’t that difficult. In fact, large striped bass are one of the easiest fish to deal with in a small boat. A large bass often finishes the battle by turning on its side, allowing me to grab its jaw and land it. This takes a bit of practice, but the lip-grab is really the way to go because no net or other tools are needed. (I use a glove on my landing hand to avoid the cuts and scratches from handling big fish.)

[Article: How to Take Better Fishing Photos With Your Phone]

The fish can be kept in the water or slid up onto my lap for easy hook removal. I use a camera mounted to the front of my kayak to automatically snap a couple pictures of a good fish as I’m preparing it for release.

It is also tough to beat the kayak as a tool for releasing stripers. Small bass are usually pretty peppy when landed and swim off as soon as they feel the water, but large bass often require a bit of reviving before release. Large fish can be quickly revived with a short tow through the water. With a pedal drive, you can hold the fish by the jaw and wait until it shakes its head and breaks away from your hand. With a paddle kayak, a plastic fish grip on a leash can be used to tow the bass next to the boat.

If you haven’t tried kayaking for stripers, you should do so this season, though first-timers ought to go with an experienced kayaker. Once you experience the Nantucket sleigh ride behind a large bass, you may be addicted. Make sure you wear a PFD every trip and stay safe on the water.