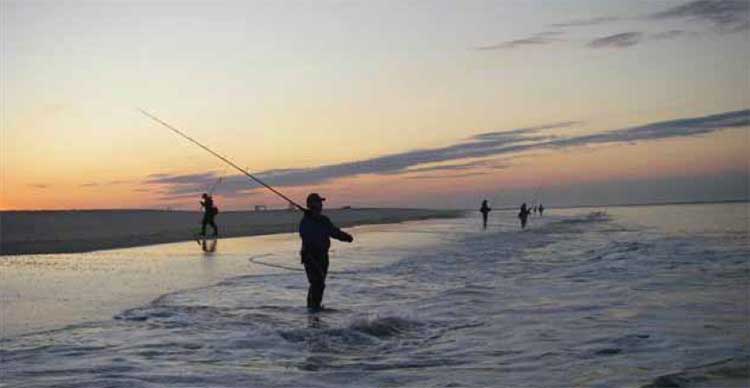 Whether you’re a beginner or an old salt looking for camaraderie, education, or to give back to the sport, there are many clubs to choose from and many reasons to join.

Aquidneck Island Striper Team
aistriperteam.com
The Aquidneck Island Striper Team is composed of charter boat captains, accomplished anglers, novice anglers and their families from in and around the area of Aquidneck Island, Rhode Island. “There are many reasons why fishermen join our team,” explains AIST president Ted Zack. “To gain local insight and fishing knowledge, to enjoy the camaraderie and fellowship of a great group of people, to visit our forums and website, to be part of our local charity and fundraising events, and to help us capture the Striper Cup!”

Cape Cod Salties
capecodsalties.org
The Cape Cod Salties meet every month in West Yarmouth and focus on skill-building sessions and workshops along with guest speakers. With over 300 members, the Salties advocate for the interests of the saltwater angler and sponsor a number of environmental improvement and community activities.

Connecticut Fly-Fisherman’s Association
ctflyfish.org
This Association has many experienced club members who enjoy sharing their knowledge about the many aspects of fly-fishing. If you love the outdoors, enjoy traveling and meeting new people, and have an interest in the environment, then the CFFA has much to offer you.

Massachusetts Striped Bass Association
msba.net
Founded in 1950, the MSBA’s objectives are to promote and encourage interest in saltwater sport fishing, to provide opportunities for those interested in saltwater sport fishing to gather for entertainment and good fellowship, to uphold sound conservation practices and laws (and to see that these laws are carried out by its members), and to further good sportsmanship and disseminate information concerning saltwater sportfishing both to Association members and others.

Narragansett Surfcasters
narragansettsurfcasters.com/
The Surfcasters Club was formed in 2005 and then incorporated in 2007 by a group of like-minded sportsmen from the southern Rhode Island area who share in the excitement of fishing for hard-fighting striped bass, bluefish, bonito and albacore.

Osterville Anglers Club
ostervilleanglersclub.com
Located on the shores of Crosby Basin, the Osterville Anglers Club is a family-oriented group committed to advancing the sport of fishing. With an active and dedicated membership, the Club sponsors a number of tournaments and social activities throughout the year.

Pioneer Valley Boat and Surf Club
pioneervalleyboatandsurf.org
Western Massachusetts’ only family-oriented saltwater fishing club attracts many of the area’s finest saltwater anglers as well as novices to the sport. Club meetings are an opportunity for members to share knowledge on topics including tackle, techniques, and great locations to fish.

Rhode Island Saltwater Anglers Association
risaa.org
The Rhode Island Saltwater Anglers Association is a large fishing club with members from all over New England. Members range from occasional anglers to weekend warriors and charter captains. RISAA was created to provide a forum for recreational saltwater anglers; to provide education to members concerning fishing techniques and overall enjoyment of fishing; to foster sportsmanship; to support marine conservation;  and to preserve and protect the rights, traditions and the future of fishing in Rhode Island.

Atlantis Anglers Association
atlantisanglers.com
The Atlantis Anglers are a Long-Island-based fishing club that has been in existence for 30 years. Club members enjoy a variety of fishing including boat, surf, pier, and party boat. Their mission is to have fun safely and promote the conservation of marine resources.

North Brookhaven Sport Fishermen Club
NBSFC.com
Chartered in 1970 by New York State, The North Brookhaven Sport Fishermen Club is a gender neutral, non-partisan and non-sectarian fishing club. We are a mix of men and women anglers that fish from private boat, charter boat and surf. Our general monthly meeting is held on the second Monday of every month at the Rose Caracappa Senior Center, 739 Rte 25A, Mt Sinai, NY. Meetings are from 7:30-9:30 PM. Club events include monthly interclub fishing contest, surf nights, an annual Club Picnic and an annual Awards Dinner. Come for a visit orcheck us out on the Web.

High Hill Striper Club
highhillstriperclub.com
Founded in 1952, the High Hill Striper Club’s focus is on surf fishing, fellowship, the sharing of knowledge, and friendly competition among its members. The club started out with an emphasis on catch and release of striped bass and continues to be involved in conservation issues today. The club is relatively small, never having more than 40 members. Most members fish the bays and surf of the North and South shores of Long Island.

Long Island Fly Rodders
liflyrodders.org
The Long Island Fly Rodders are dedicated to the sport of fly fishing. LIFR was born in 1981 and organized as a structured club in 1985 by a handful of dedicated fly fishermen from Long Island and Queens. Today, the club consists of more than 200 members. LIFR members are passionate anglers who enjoy four seasons of fly-fishing activity including winter fly-tying, spring clean-ups and fishing, summer cookouts and largemouth bass fishing, and fall saltwater fly-fishing for stripers and blues.

Asbury Park Fishing Club
asburyparkfishingclub.com
The Asbury Park Fishing Club has remained active for more than a century. Members are committed to the preservation of striped bass and the alewives that spawn in Deal Lake. Every year, the club hosts two barbecues, a cleanup of Deal Lake and neighboring beaches, spring and fall fishing tournaments and a popular fishing flea market.

Hi-Mar Striper Club
hi-mar.com
For nearly 40 years, Hi-Mar club membership has consisted of Sandy Hook and Raritan Bay charter captains, family fishermen, and individuals who want to make a difference in preserving the striper fishery. Monthly meetings at the Hi-Mar Striper Club usually consist of a seminar. Hi-Mar members have played an important role in bringing public attention to the problem of overharvesting bunker.

Jersey Shore Surfcasters
jerseyshoresurfcasters.com
The Jersey Shore Surfcasters was founded in 2005 by a small group of striped bass surfcasters who put an emphasis on two things, fishing regularly and giving something back to the community. The club meets monthly, and though it is an invitation-only club, outside inquiries are always welcome. All prospective members have to be referred by an active member and then approved by the Membership Committee.

Shark River Surf Anglers
sharkriversurfanglers.com
Based in Belmar, New Jersey, the Shark River Surf Anglers are dedicated to the pursuit of striped bass and good times. The Club hosts a Kids’ Trout Tournament each spring on the opening day of trout season on Spring Lake. In late September, the club sponsors a camping trip to Montauk, New York, for four days of surf fishing. The club also hosts a number of non-fishing-related get-togethers including a Lakewood Blueclaws outing and a year-end holiday party.

Spring Lake Live-Liner Fishing Club
springlakeliveliners.org
After perfecting fishing live baits from shore, Bob Matthews, Fred DeJager, Howard Cannon and Bill MacGowan formed the Spring Lake Live-Liners, a club dedicated to live-lining for striped bass. It is committed to preserving the esteemed history of surfcasting for striped bass and promoting events and other organizations that coincide with the club’s overall mission.