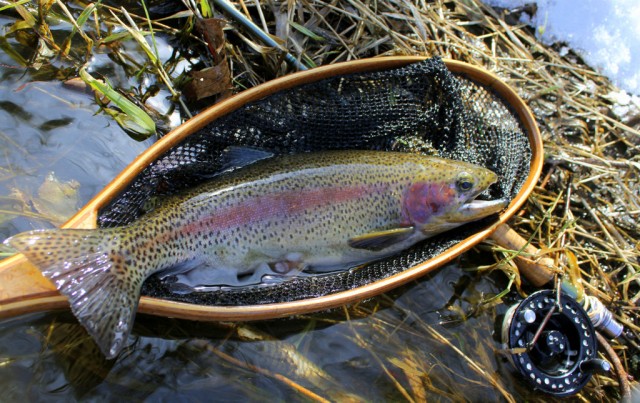 The 2016 season is positioned once again to provide the normally superb trout fishing opportunities New Jersey anglers have grown to expect and appreciate. The average size of the stocked trout has already reached the baseline target for the entire season of 10.5 inches, and we still have several weeks before the first trout is stocked into New Jersey waters.

Ten Bonus Broodstock Lakes and the breeder stocking programs will once again provide plenty of trophy size fish within a short drive from anywhere in the state. Stream flows are roaring and the lakes and ponds are at full pool from the recent rains making all of the trout stocked waterbodies ready for the 570,000 rainbow trout raised at the Pequest Trout Hatchery.

Trout Stocking Regulations signs are again equipped with QR Codes! A quick scan with a smart phone brings up the entire spring stocking schedule, complete with all seven weeks of stocking following Opening Day on April 9. The schedule includes day of the week and the number of trout stocked. This helped guide anglers to other fishing opportunities throughout the state right from their favorite fishing spot.

A new type of license is now available to anglers introducing a “Buddy” to freshwater fishing. The Fishing Buddy License offers both a current and a new angler (or two new anglers) reduced price fishing licenses! The discounted licenses are available to resident anglers ages 16 to 65, or nonresident anglers over age 16, who purchase their freshwater fishing license with a “Buddy.” Eligibility requires at least one new angler.

Anglers are reminded that as a result of a disease outbreak at the Pequest hatchery (2013/2014) the division is rearing Rainbow Trout only. A silver lining to this is that studies have shown that rainbows are more aggressive and more likely to fall victim to a well-presented lure or baited hook, much to the satisfaction of more trout anglers, particularly on Opening Day.

For those anglers who just love to catch Brown Trout or Brook Trout, there are still opportunities out there. Waterbodies such as the South Branch Raritan River, Pequannock River and Big Flat Brook, (to name a few) have naturally reproducing trout in them that will surprise and delight many lucky anglers with their beautiful markings and coloration.

There are also waters in New Jersey that remain cool enough to support trout year round and contain holdover Brook and Brown Trout from previous stockings. Releasing Brook and Brown Trout will help preserve these opportunities well into the future. These trout, in addition to the Rainbow Trout stocked this spring from Pequest will no doubt keep New Jersey as one of the top trout fishing destinations in the East.

Ten lakes received an additional helping of large broodstock through the State’s Bonus Broodstock program. Each year a different set of waters is selected statewide, and there’s bound to be an opportunity near you. These waterbodies generally receive 30 – 50 of these extra large trout.

Anglers should be aware that most trout-stocked waters are always closed to fishing during the 3 weeks leading up to Opening Day (March 21 – April 9, 2016 at 8 a.m.). There are several waters that remain open for fishing: Lake Hopatcong (Morris/Sussex), Mountain Lake (Warren), Prospertown Lake (Ocean), Lake Shenandoah (Ocean), Swartswood Lake (Sussex), and the section of Lawrence Brook from Davidsons Mill Rd. to Church Lane are open year round to fishing.

Catch and Release Only, Seasonal, and Year-Round Trout Conservation Areas and designated Holdover Trout Lakes are also open to fishing. However, trout caught in any of these waters during this period must be released immediately. Note that, fishing is not permitted on Seasonal Trout Conservation Areas from 12:01 a.m. to 8 a.m. on April 9, 2016. Trout can be harvested from the state’s two Trophy Trout Lakes, Merrill Creek and Round Valley Reservoirs. Be sure to check the Freshwater Digest (available the week of March 21) for regulations pertaining to these waters.

Fish and Wildlife will place “Hook-a-Winner” jaw-tags on 1,000 Rainbow Trout stocked in the spring. Anglers who catch a Hook-a-Winner trout can claim their prize (a certificate and patch) by contacting the Pequest Trout Hatchery 908-637-4173 ext. 113.

Each spring, the Division’s Pequest Trout Hatchery stocks over 570,000 rainbow trout into 88 streams and 88 ponds and lakes located throughout New Jersey. Nearly 1/3 of these trout, 183,000, will await anglers on opening day. No doubt more than a few of the 14-16″ trout stocked last fall or winter are alive and well, just waiting to be caught this spring. The majority of trout average 10½ inches but large breeders, measuring 15 – 21″, and weighing up to 5 pounds are also distributed in the early weeks of the season. The state’s sixteen major trout streams are stocked every week following Opening Day and are closed to fishing from 5 am to 5 pm on the day of stocking to allow the trout a chance to disperse. All other waters are open to fishing on stocking days, following opening day, with most stocked at least three times. Since every county has waters that are stocked with trout, trout fishing opportunities are never too far away.

Don’t forget that a fishing license and trout stamp is required to fish for trout if you are 16 years or older. Children under 16 and New Jersey residents 70 years and older can fish for free. Licenses and stamps may be obtained through one of the many license agents statewide, or online.

Any deviations from the stocking schedule will be noted here, on the 2016 Spring Stocking Schedules page and on the Trout Hotline (609-633-6765).