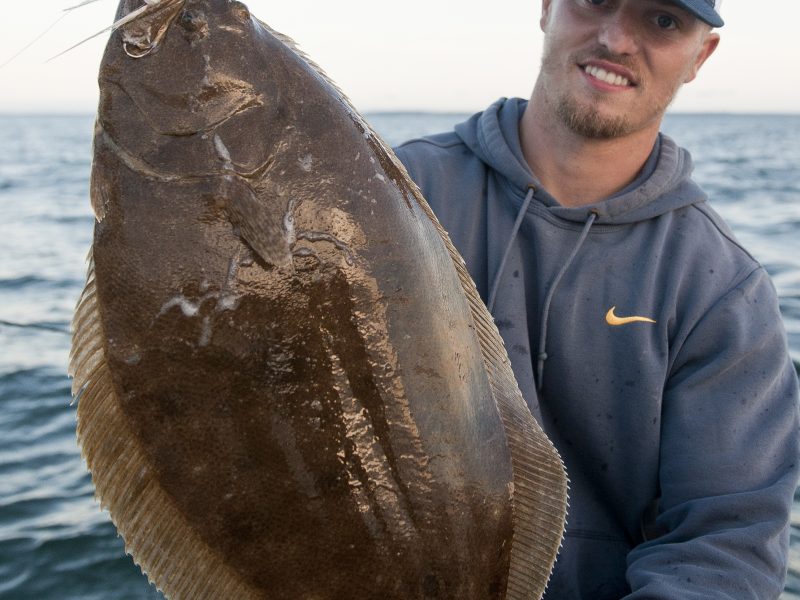 One thing I’ve noticed about highly successful fluke anglers over the years is they know how to tie a variety of rigs. There are fluke rigs designed to fish sandy flats, inlets, rocky waters, oceans, bays, sounds and everywhere in between. Even novice fluke fans can usually identify two or three different rigs used to target these delicious flatfish.

There are dozens of different fluke rigs worth trying. Some have all the bells and whistles you can imagine; others are simple, basic and, when used under specific conditions, are just as productive as the more glamorous designs. I’m a diehard fluke chaser and have tried just about every rig that’s ever been touted as the next great fluke catcher. I’ve had great success with some, lesser results with others, and have been downright frustrated by a few.

I prefer to keep my fluke rigs simple, but that doesn’t mean they have to be drab. Adding a bright teaser, grub or squid skirt to most rigs can improve productivity, especially when underwater visibility is limited. Consider white, chartreuse, and hot pink as go-to colors, as well as Nuclear Chicken—a pattern for which doormats seem to have a real sweet spot. 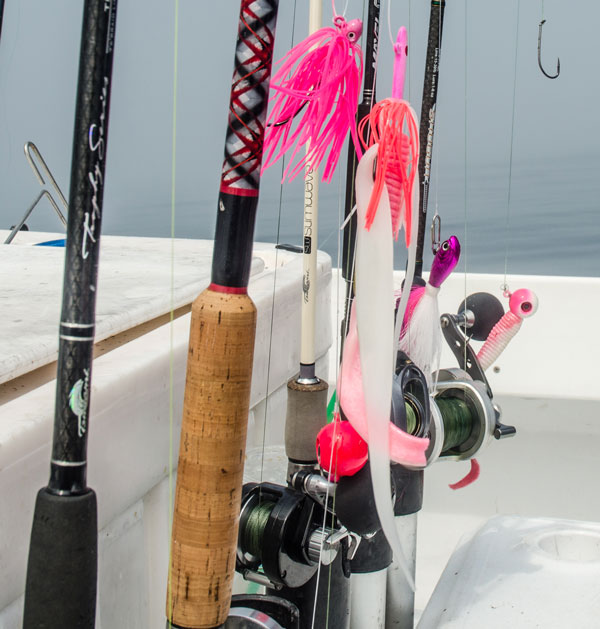 Following are ten rigs that have proven themselves beyond reproach on my flatfish excursions. The first seven you can tie on your own; the last three are best purchased. Just keep in mind that it doesn’t matter which rig you choose if you aren’t using enough weight to frequently bump the bottom while drifting.

I began fiddling with the fish-finder rig as a kid, back when the earth’s crust was just starting to cool. It allows you to feed a little line to a fluke that has gobbled your bait without the fish feeling the extra weight of the sinker. This equates to more solid hook-ups since you can give the fish a little extra time to fully commit.

For bay or shallow-water fishing, go with a size 3/0 or 4/0 octopus, sproat or wide-gap hook. For larger fish, ocean fishing, or live bait, choose a 6/0 or 7/0. The bigger hooks work better with larger baits and make it tougher to stick the shorts, resulting in fewer fish to be released. Don’t be too quick to set the hook–at the very least, let the line come fully tight. If you have more patience, allow an extra 5 to 10 seconds before setting the hook with a smooth, sweeping lift of the rod.

When fluke fishing, you need just enough weight to be able to maintain bottom contact. As a general rule, start with 1-ounce of weight for every 10-feet of water.

When fluke are hitting aggressively, it’s often more productive to concentrate on one fish at a time. Doing so results in fewer tangles, quicker releases, and the chance to fight a doormat without a second summer flattie tugging in a different direction. This is where the single bucktail or fluke ball rig comes in handy.

Ideal for shallow water and light tackle, it’s fast to tie and easy to control above deck since you don’t have a second hook swinging around. This rig is also a good choice for working around wrecks because you don’t have to worry about a second hook snagging structure after a doormat strikes. Bait your bucktail or fluke ball with a 4- to 6-inch narrow strip of squid, spearing, fish strip or similar offering. Work it with a short, sharp jigging motion and strike at the lightest tap.

This knot allows a jig to swing loosely at the end of your line, which results in better action. It also doubles your leader at the business end, which can come in handy when dealing with toothy fluke.

Used to present one bait along the bottom and a teaser or second bait above, the high-low rig is a popular choice among fluke fans. Especially productive in shallow water where summer flatties are more inclined to rise, it keeps two baits simultaneously in the strike zone and works well in depths to 80 feet. In addition to possibly tempting two fish at once, it allows anglers to continue fishing without checking for bait after missing a hit.

To keep the teaser/upper bait in the primary feeding zone, let out enough scope so that the line stays at a 30-degree angle to the water while drifting. Glide the rig to a foot above the bottom once or twice per minute to check for the weight of light-biting pool winners. Tip the top hook or teaser with a single spearing or thin pennant of squid. Bait the lower hook with a long squid strip, strip bait, or spearing and squid combo.

To Tie:
Start with a 36-inch length of 30-pound-test mono leader. To one end, attach a large barrel swivel with a clinch knot for connecting to the main line. At the opposite end, use a surgeon’s loop to secure the sinker. Tie a 2-inch dropper loop 4 to 6 inches above the sinker and add a 3/0 to 5/0 pre-snelled wide gap, octopus or sproat hook. Next, tie an 8-inch dropper loop 16 to 20 inches above the smaller dropper and clip one end free at the knot to make the high leader. Secure your teaser or top hook to this with a clinch knot so that it rides eight to 12 inches from the main line.

Released last year by Bill Witchey at Comb’s Bait and Tackle in Amityville, New York, this novel rig features two Thundermist T-Swivels with a 90-pound test Rosco barrel swivel and comes with 4/0 or 5/0 VMC Permasteel corrosion-free hooks. Use the 4/0 in the bay and the 5/0 in the ocean. Tied on 40-pound-test Triplefish leader material, this tangle-free hi-low rig has a 30-inch leader on the bottom and an 18-inch leader on top. The full rig length measures about 40 inches.

Use a sinker, fluke ball or bucktail as a weight with this rig. For bait, try a squid strip or squid and spearing combo on the bottom hook and a 4-inch Berkley Gulp! Swimming Minnow or pair of spearing up top. Fish this rig on a tight line at a 45-degree angle and the higher hook with the Gulp! should catch more big fish.

This rig does a great job of riding without tangles, even in 100-foot depths.

This fluke rig was popular from shore and small boats in the sandy rips around Nantucket in the past, and still works to this day. It consists of a Hopkins Shorty with the hook removed and an 18- to 24-inch leader tied to the swivel. At the end of the leader is either a bare hook or a bucktail teaser. Baited up with a strip of squid, cut bait, or a piece of Berkley Gulp!, this rig casts well on spinning tackle, flashing and fluttering just above the bottom on a slow, steady retrieve. One way to really get the most out of this rig is to set your vessel up on a sandbar, get out, and cast to deeper water from along the shoals. 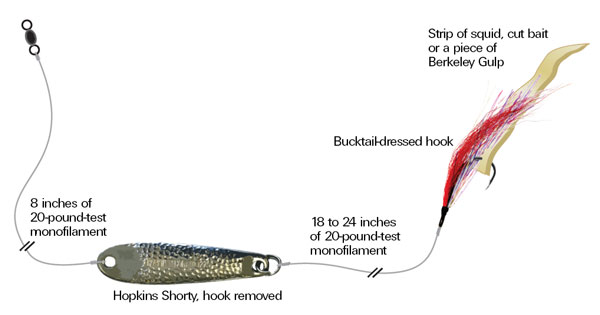 No matter where you toss this rig, simply reel back slowly enough that the lure stays in contact with the bottom. Because you’ll be crawling it along, work over sand, not over rocks. Lift the rod easily if you feel a tap and set hard should there be any extra weight at the end of your line. Tip the hook with a strip of squid or a thin fish strip—sea robin is preferred.

To Tie:
Attach a Hopkins Shorty to the end of a short leader and barrel swivel. Remove the hook and tie an 18- to 24-inch leader of 20-pound test monofilament to the split ring. At the end of the leader, attach either a bare or a bucktail-dressed hook.

Featuring classic teardrop Panther Martin spinner bodies and a fluke-tail jerkbait, the FlukeTrain rig is weedless and ideal for jigging or retrieving over rocks, sandy bottom and around structure. You can tie it directly to your main line for shallow-water jigging or use it as the bottom hook on a high-low rig.

As the FlukeTrain is bounced, twitched and dragged across the bottom, the three independent inline jig weights slide back and forth to click and clack as they bump against rocks, shells and each other. Vivid body colors really help this rig stand out. It works best if jigged lightly, with an occasional break to let the fish commit.

If you prefer, remove the soft-plastic fluke tail and use a flat-tailed Berkley Gulp! fluke instead.

This is a terrific rig for anglers who prefer to actively jig for fluke. Work a SPRO Power Bucktail vertically by bouncing it on a tight line to keep it from snagging between rocks or along wreck edges. It is deadly for fishing rough bottoms.

Tip the teaser with a single spearing and the bucktail with a large spearing, strip of squid, or strip bait. The bucktail should be heavy enough to bounce on the bottom, which can be as light as 5/8 ounces in shallow water with light current or up to 3 or 5 ounces in deep water and strong current. If more weight is needed to stay deep, choose a single-hook bottom rig instead.

To Tie:
Secure a 3/4- to 3-ounce bucktail to the end of a 36-inch, 30- to 40-pound mono or fluorocarbon leader using a Rapala loop knot. Tie a 3- to 4-inch dropper loop 16 to 20 inches above the bottom bucktail and loop on a teaser or second, lighter bucktail. Attach the rig to the main line via a large barrel swivel.

So-called because fluke eat it “like popcorn,” this rig is similar to a high-low rig except that on the end of each of the two 3- to 4-inch long dropper loops is a small ¼- to ¾-ounce bucktail jig. This is a popular deep-water option, best used around sandy structure with few snags.

Fishermen are occasionally skeptical that the small hooks on these bucktails will hang a big fluke, but the larger fish often inhale the jig so entirely that the hook sticks securely deep inside the fluke’s mouth.
Upon dropping this rig to the bottom, keep the rod in constant motion, bouncing it along the bottom and occasionally giving it a big sweep. The purpose is to bring the two bucktails alive as you drift, causing the skirts to pulse and the strip of squid or cut bait to flutter enticingly.

Depending on who you ask, this rig can be used for anything from presenting baits in the surf to slow-trolling live bait in deep inlet pockets. I like the latter application, but I also use it in 20- to 40-foot depths to drag a large fish strip or a 6-inch Berkley Gulp! grub in Nuclear Chicken pattern. It’s a better rig for working in sand than rocks and one with which you must learn to time the strike just right—especially when trolling. If you feel a tap or heaviness, wait until the rod takes on some set, then wait about 10 seconds more before setting the hook. 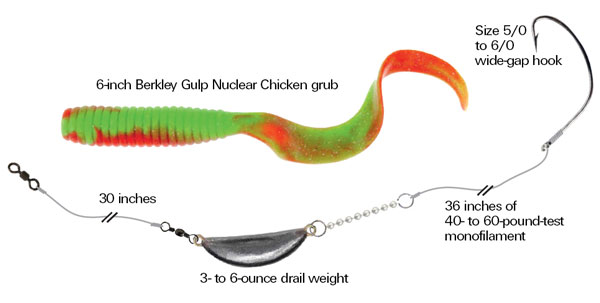 I always tie this rig with a large hook—generally a 5/0 or 6/0 wide gap—because it’s a “keeper rig.” Bait up with big sea robin strips, the entire fillet of a tinker mackerel, or a 6-inch Berkley Gulp! Nuclear Chicken grub. Anything you hook will fully swallow the bait, reducing its odds of surviving release, so use this rig with discretion. Break it out only when big fish are clearly in the mix.

To Tie:
Attach a large barrel swivel to one end of a 3-foot length of 40- to 60-pound-test monofilament line. Attach a second mono leader of the same or greater strength to the back of the drail and snell the hook at the terminal end. I use Ande for leader material in this instance because it has superior abrasion resistance.

Video: How to Fillet a Fluke